Debbie Matenopoulos is a famous American television host, actress, and journalist. She is married and the mother of one kid. 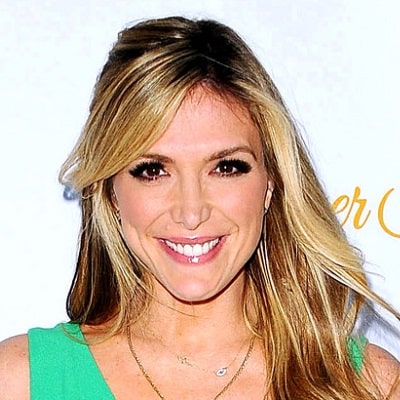 What is the relationship of Debbie Matenopoulos?

Debbie Matenopoulos is a married woman. She has a conjugal relationship with Jon Falcone and he is also a television personality. The pair met the very first time on the set of ‘The Gossip Queens’ in 2010 and then got engaged in 2012. Finally, the couple tied their knot in 2013 in Athens, Greece, and welcomed a beautiful daughter named Alexandra Kalliope Falcone on October 29, 2014.

Previously, she was married to Jay Faires who is the president of Musci at Lion’s gate Entertainment and also a founder of Mammoth Records. They met for the first time in 2000 as they were introduced by their mutual friend. At that time, she was hosting the talk show ‘Good Day Live’. The couple tied their knot on July 5, 2003, but got separated in March 2008. Her husband filed for divorce on November 12, 2008, in Los Angeles County Superior Court but the divorce was finalized in 2009.

Who is Debbie Matenopoulos?

Debbie Matenopoulos is a famous American television host, actress, and journalist who is best recognized for her appearance in the action-comedy series Celebrity Deathmatch. Also, she is recognized for her debut as the youngest co-host of Walter’s news talk show ‘The View’.

Debbie holds American citizenship but her ethnicity is Greek.

She joined John Randolph Tucker High School and then enrolled at the Virginia Commonwealth University for one year. After that, she studied Journalism at New York University.

During her study at New York University, she got the opportunity to become a member of the women’s fraternity, Alpha Omicron Pi, and worked as an intern at MTV network.

She debuted her career as an MTV production assistant in 1997. Her talent helped to attract Barbara Walters, a broadcast journalist, and she invited Debbie for an audition on Walter’s news talk show called ‘The View’.

Moreover, Debbie made her appearance on The Daily Show along with Michael Showalter and Dervla Kirwan.

Furthermore, she appeared as a  host in the American news TV show called ‘Good Day Live’ in 2001 and then appeared as a co-host on the talk-show, Queer Edge with Jack E. Jett. Moreover, her other television works are The Talk, The Insider, etc.

Unfortunately, she was hospitalized for an injury. She tried to perform a stunt for a segment of ‘Good Day Live’ as she had to fall from a three-story building at a Los Angeles fire station. The landing was not so perfect on an airbag and she had to be taken to the hospital.

She was nominated for Daytime Emmy Awards in the category Outstanding Talk Show for ‘The View’ in 1998 and 1999.

Debbie stands at a height of 5 ft. 9 inches and weighs 58 kg. Also, she has beautiful brown eyes and blonde hair. In addition, her body measurement is 33-23-33 inches.