Debby Ryan is an American actress and singer. Debby is married to her fiance. 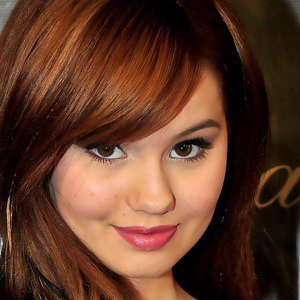 Look at what you want to change, gather a few people who believe in it like you do, and start moving forward. It's important to remember that you don't always need a destination. Sometimes, you just have to make forward motion. And you absolutely can

Have an anchor so that life doesn't toss you around

"I'm in love and very happy, We've evolved and grown so much in our careers, in the relationship, as people since we first met. It's cool and special to have that support system and we are each other's biggest fans.

What is the relationship of Debby Ryan?

Debby Ryan is married to Josh Dun on 31st December 2019. Their wedding was an Austin ceremony.

She got engaged to Josh Dun in New Zealand. He proposed to Ryan in a treehouse in New Zealand. This couple announced their engagement to social media on 22 Dec 2018. The couple started dating from 2013

Who is Debby Ryan?

Debby Ryan is an American actress and singer. She is extremely prominent for her role in “The Suite Life on Deck”, “16 Wishes”, and “Jessie”.

Ryan was born to Irish parents on May 13, 1993, in Huntsville, Alabama, U.S.A. Her nationality is American and belongs to the Irish ethnicity.

She lived in Germany until she was 10 years old and can speak both English and German. In 2002, Ryan moved to Texas along with her family.

She attended a private school.

Debby Ryan started her career through T.V ads and commercial advertisements in her early teens.

She made her acting debut in the year 2006 and appeared in one of the episodes of T.V series “Barney and Friends” as ‘Debby’. Next year, she made her debut in the film “Barney: Let’s Go to the Firehouse” as ‘Teenage Girl.

At the initial phase of her career, Debby starred in several minor roles in T.V series and low-rated films including “The Longshots”, “What If…”, and “Jonas Brothers: Living the Dream”.

Finally, in 2008, she got a lead role as ‘Bailey Pickett in a successful T.V series “The Suite Life on Deck” for which she was able to collect huge positive responses and reviews from fans and viewers.

There are no drastic rumors regarding Ryan’s personal and professional life. It seems like she is doing the best job without harming others for which she hasn’t been a part of controversy yet.

Debby Ryan has a height of 5 feet 5 inches. Her body weighs 59kg.

Besides these, her body measurements are 35-28-34 inches.

Debby is currently active on social media and on Youtube.