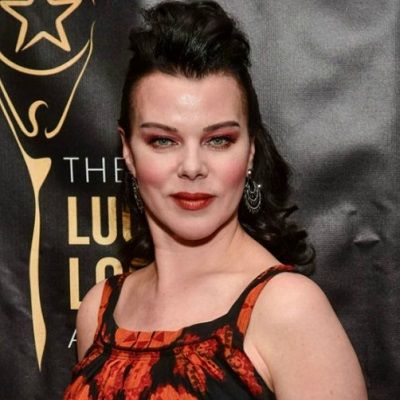 About Madonna: "She's a dear old friend, so seeing her at the Evita (1996) premiere was a high point. She never looked more beautiful, glamorous and happy" (In Style magazine, Sept/2006).

My mom had me at 16, and took me every place she went. I remember going on peace marches. She tried to take me to Woodstock--it was pouring rain. It was on my birthday, and I was crying so much in the car they turned the car around and dumped me at my grandmother's house...I had a little attitude.

What is the relationship of Debi Mazar?

Debi Mazar is a married woman. She is married to Gabriele Corcos on 16th March 2002. Similarly, they have two daughters Giulia and Evelina.

They live in Los Angeles but moved now to Brooklyn, New York in 2009.

Before him, Debi dated Paul Reubens. They dated for several years.

Who is Debi Mazar?

Debi Mazar known as Deborah Anne Mazar Corcos is an American actress and television personality. She is known for playing a sharp-tongued woman.

Similarly, she is known for her role in a series named Cooking Channel, Jersey Girl-type roles, HBO series.

As a Coronavirus Patient

On 21 March 2020, Debi announces that she is suffering from COVID-19. Through Instagram, she gave updates about her symptoms and condition.

She was born on 13th August 1964 in New York City, US. She is the daughter of Harry Mazar(father) and Nancy Mazar(mother). Similarly, she spent her early life in the country in upstate New York with her mother.

When she was a teenager, she relocated to Long Island, where she lived with her godparents as her parents annulled their marriage shortly after her birth.

Similarly, she belongs to American nationality and her ethnicity is Ashkenazi Jewish.

Debi Mazar worked on odd jobs like selling jewelry at Fiorucci with Linda Ramone and Joey Arias, later as a dental assistant, and at a nightclub. Similarly, while working at Danceteria, Mazar met Madonna. Later, she hired Mazar to do her makeup for the music video for “Everybody“.

Likewise, she began her career as a hip-hop b-girl in New York City. After that, her first television appearance was on the pilot for a hip hop television dance show, Graffiti Rock in the year 1984. After that, she appeared in five of Madonna’s music videos “Papa Don’t Preach”, “True Blue”, “Justify My Love”, “Deeper and Deeper” and “Music”.

Similarly, she appeared on a Friends episode in its eighth season (“The One Where Rachel Has a Baby, Part One”). She played “Doreen, the Evil Bitch,” a crazed pregnant woman who shares a hospital room with Rachel.

In the year 2018, she played Ava Gardner in the Spanish period comedy-drama television series Arde Madrid, telling the story of the period which the American actress spent in Madrid during Francoist Spain.

As of 2022, this actress has an estimated net worth of $5 million. Similarly, she might earn a huge amount of money from her career. She has starred in numerous films and TV series. But she has not shared her salary and income in public.

Debi Mazar has a height of 5 feet 5 inches and her weight is around 55 kg.

Similarly, her hair color is dark brown and she has blue color eyes. She has a body measurement of 34-26-35 inches and has a breast size of 32 C.Her shoe size is 8(US) and her dress size is 4(US).

Brooke Shields Gets Emotional as Her Daughter Rowan Henchy Heads Back To College!