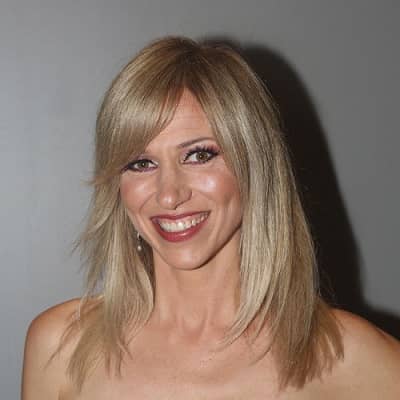 Deborah Gibson’s current relationship status is single. But she has different past affairs.

The actress had an encounter with a musician named Gunnar Nelson in the past. Likely, she dated British actor Darren Day in 1994.

Debbie was in a relationship with a game show host Todd Newton from 1997 to 1998.

She was also once engaged to Jonathan Kanterman. They also often appeared together in the media between 1999 and 2003. Unfortunately, in August 2003, it was revealed that they had called off the wedding.

In 2003, it was rumored that she had called off her wedding after she met Ryan Seacrest, a well-known TV host. They teamed up to judge American Juniors in 2003.

In the mid-2000s, she dated Constantine Maroulis, a fellow singer from Greece for a year separating in 2005. She also had a fling with the fellow actor Lorenzo Lamas between July 2006 and February 2007.

After it, Debbie dated a fellow actor, Joey Gian for a year.

In April 2008, she began dating Dr. Rutledge Taylor who was behind the formulation of NightKaps, capsules that helped with insomnia. Since 2013 Debbie battled Lyme disease has suffered adrenal fatigue. Hence the couple also decided not to have children.

Debbie was also adamant about not getting married and says that she found the ceremony odd, traditional, and unnecessary. The couple broke up in early 2019.

Who is Deborah Gibson?

Her debut album Out of the Blue has received international hits and was also certified triple platinum by the Recording Industry Association of America.

She was born on August 31, 1970, in Brooklyn, New York, the United States. Her birth name is Deborah Ann Gibson. She grew up in Merrick along with her three sisters Denise Gibson, Michele Gibson, and Karen Gibson.

Her father’s name is Joseph Gibson. Likely, her mother’s name is Diane Gibson. Her dad’s last name was actually Schultz but her mom remarried a guy whose last name was Gibson before leaving him in the orphanage. She met her real father at the age of 50.

Talking about her nationality, it is, American and is of Mixed (German, Russian, Italian, and Sicilian) ethnicity.

She graduated from Sanford H. Calhoun High School in Merrick, New York, the United States in 1988.

Deborah Gibson takes piano lessons from Morton Estrin when she was just five yrs old. She wrote her first song, Make Sure You Know Your Classroom, at age six. Likewise, in fifth grade, she composed an opera, Alice in Operaland.

In addition to composing, Gibson also started performing at a very young age. She began acting in community theater productions from the age of five. At the age of 8, she joined the children’s chorus at New York City’s famed Metropolitan Opera House.

Gibson built a makeshift studio in her family’s garage as per pursuing her music career. She used to write and record music there. Moreover, at the age of 12, she also won $1,000 in a songwriting contest fro writing her song I Come From America.

Gibson’s musical theater career in the 1990s and 2000s proved every bit as successful as her remarkable run as a 1980s pop sensation. She even has entered the Guinness Book of World Records for being the youngest person to have written a Billboard No. 1 song.

Her debut studio album, Out of the Blue was released in 1987. It received a huge success and was later certified triple “Platinum” by the RIAA. Her single Only in My Dreams from that album was a spot in fourth on the Billboard. Her other three singles also reached the Top 5 in the year 1988.

Moreover, the single from the album, Foolish Beat, was an international hit earning her a title of the youngest female artist that wrote, performed, and produced a single that topped the Billboard Hot 100 chart.

In 1996, she released Deborah under a self-label with EMI Records. Likely, she released M.Y.O.B in 2001 after a five-year hiatus.

She established herself as a musical theater star from pop music. As a stage actress, she prefers the name, Deborah rather than Debbie Gibson. She made her Broadway debut as Eponine in the 1992 production of Les Miserables and as Sandy in a West End production of Grease.

Furthermore, she portrays Rizzo in the Grease U.S. national tour before returning to Broadway for turns as Belle in Beauty and the Beast (1997) and Gypsy Rose Lee in Gypsy (1998). Also, she appeared on-stage in Funny Girl, Joseph, and The Amazing Technicolor Dreamcoat, and Chicago.

She played lead roles in some popular Broadway musicals of the time. Her notable performances include the narrator in Joseph and the Amazing Technicolor Dreamcoat (2000); the title role in Cinderella (2001); Velma Kelly in Chicago (2002); and Sally Bowles in Cabaret (2003).

In 2009, she made her debut in film with the independent movie Coffee Date starring Jonathan Silverman and Wilson Cruz.

She also shares the screen with Lorenzo Lamas on Mega Shark Versus Giant Octopus 2009. Later, she starred in Mega Python vs. Gatoroid in the year 2011 and later appeared as a cameo actor in Rock of Ages in 2012.

In 2005, Debbie made a comeback in the media with a nude feature in the Playboy magazine promoting her new single. Also, she appeared as the cover girl for Lavender Magazine in 2008.

In recent years, Gibson is engaged in educating and mentoring young girls hoping to make it in the entertainment industry.

With this objective, she founded Deborah Gibson’s Electric Youth in 2008. It is a youth camp for arts education. Likely a year later she founded the Gibson Girl Foundation to provide scholarships for underprivileged youngsters to study the arts.

The actress must have amassed a good amount from her music and acting career. Also, Deborah owns two of her foundation.

Her net worth is estimated at around $5 million. Other information regarding her salary is not available.

In 2003, it was rumored that Deborah had called off her wedding with her then boyfriend, Jonathan Kanterman after she met Ryan Seacrest, a well-known TV host.

They also teamed up to judge American Juniors in 2003.

She has blonde colored hair and hazel colored eyes. Her bra size, dress size, and shoe size is 34B, 4 (US), and 8 (US) respectively.

Furthermore, She has her own YouTube channel with over 40K subscribers.

Also, get to know about Magic Johnson, Dominic Toliver, and Andy Bell.