Currently, Deborah is a married woman. John Briggs is her latest husband.

Debbie was married to Marshall Mathers II at the age of 15 years and when she became 17 years she had given birth to Eminem. She is known to be suffering from Munchausen syndrome by proxy and used to feign her children’s illness and use it to garner support and sympathy.

Marshall Mathers II left her when Eminem was just 18 months of age. Eminem underwent physical, verbal, and psychological trauma due to her. She has strained relations with her son and had sued him for $ 10 million. She had belittled her son claiming that his managers wrote the lyrics for him. She was remarried thrice after that.

Berger Olsen Au Gres was one of her former husbands. She is addicted to drugs. Her former boyfriend, Don De Marc said that she had an irrational character. Fred J. Samara is the father of her second son, Nathan Kane Samra. 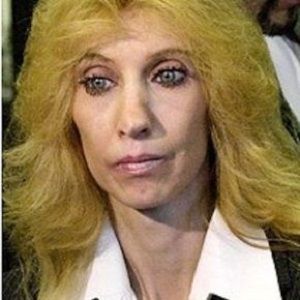 Who is Deborah R. Nelson-Mathers?

She is mother-in-law to Kimberly Anne Scott and grandmother of Hailie Jade Mathers.

Deborah R. Nelson-Mathers’s parents are Bob Nelson(father) and Betty Hixson(mother). She had a broken home and an abusive stepfather and mother who used to physically assault her. Her mother had attempted suicide many times.

She had a troubled childhood. She had 4 other siblings-Steven Nelson, Todd Nelson, Betty Renee, and Ronnie Polkinghorn. Ronnie committed suicide, while Steven is a surviving stroke patient.

Todd is in prison on proven charges of killing his brother-in-law. Betty Renee is working as a housekeeper at Eminem’s new mansion in Clinton Township. She resides there with her husband Jack and three children.

As per her education, She was a student of Lancaster High School but could not pursue her studies due to her problematic family background. Debbie Mathers married Marshall Bruce II when she was just 15 years old.

Debbie Mathers is better known due to her son, the iconic rapper Eminem. She has also been in news for her multiple relationships with men and unhealthy relations with her son. After her first husband abandoned her and Eminem when Eminem was 18 months old, she struggled to make a living.

She said that she did some lowly menial jobs. But Eminem had mentioned that she never had a job and they were dependent on welfare organizations for money. They used to shuttle between Kansas City and Detroit often living in low-tough colonies. Debbie would falsely accuse people and organizations of some wrongdoings and extract money from them.

She also used to cook up her children’s fake illnesses and use these to earn some money. She supposedly runs a taxi service in St. Joseph. She has co-authored a book on her son, Eminem, My Son Marshall, My Son Eminem in 2008. She has also released a 3-song CD record titled ‘Dear Marshall’. In one of her interviews in 2008, she had mentioned suffering from breast cancer and being under a doctor’s care for it.

Deborah R. Nelson-Mathers has been hot stuff for the media. She has been in the news for her personal life, multiple relationships, her estranged relations with her son Eminem and the defamatory court cases she slammed on people and organizations including her own son.

She was sued by Neal Alpert a week before the release of her book ‘My son Marshall, my son Eminem’. Neal stated that he had helped Debbie with the book but had not received the promised 25% of the sales profits. This book was also received by all with suspicion of her claims and was said to be among five of the most controversial memoirs.