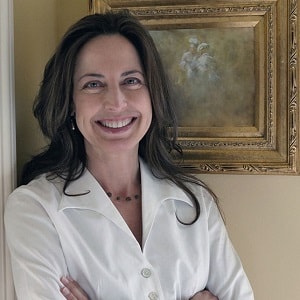 Debra Ponzek was previously married to American Chef Bobby Flay. The pair dated for 1 year after getting together in 1990. Later, they married on 11 May 1991. They separated after a year in 1993.

Currently, Debra is married to Greg Addonizio since 1994. She has not revealed much about this marriage. The marriage seems stable and is going strong as no news regarding any extramarital affairs is known at present.

Debra Ponzek is an internationally-acclaimed chef and author of The Dinnertime Survival cookbook.

She was born in New Jersey on August 26, 1961. Currently, information regarding her parents, childhood, and early life is not available. She had a passion for cooking from an early age.

She is of American nationality. Furthermore, she has not revealed her ethnic background as of now.

Talking about her education, Debra attended the school for biomedical engineering at Boston University for two years. Next, she discovered her passion for cooking. Furthermore, she also became enrolled at the Culinary Institute of America.

Initially, Debra Ponzek worked in a number of restaurants in New York City. She moved to Connecticut in 1994. Next, she became the executive chef at New York’s Montrachet Restaurant for seven years. There, she earned three stars three times from the New York Times.

Apart from her cooking career, Debra has also appeared in numerous television series in her career. She appeared on ‘Late Night with David Letterman’, ‘The Today Show’, ‘CBS Morning Show’, ‘Sarah’s Secrets’, ‘Cooking Live’, ‘NBC’s Today Show’, and others.

Additionally, she has won several awards including Food & Wine magazine’s ‘Ten Best New Chefs’, the James Beard Foundation’s ‘Rising Star Chef of the Year’, and the Chefs of America ‘Chef of the Year’.

Debra has not revealed her current salary. Furthermore, regarding the estimated net worth of her, it is around $30 million.

Debra has kept most of her personal information a secret from the rest of the world. Hence, she has not been part of any notable controversies to date. Furthermore, there are no rumors concerning her at present.

Talking about her body measurement, Debra Ponzek has not revealed information regarding her height and weight. Her hair color is black/brown and eye color is blue.