Declan Donnelly is an English TV presenter, producer, and actor. 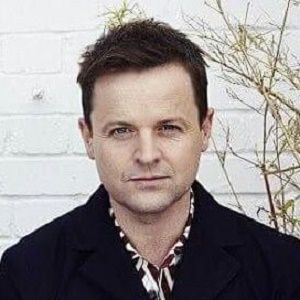 'When she first walked on stage in Glasgow, I was wondering what to have for lunch.'

We've seen Tom Cruise do it so thought we should too. When we met Susan Boyle she was a very unassuming lady. We didn't expect anything and we were probably a little dismissive of her.

What is the relationship of Declan Donnelly?

Declan Donnelly has been married to Ali Astall who is actually his and Partlin manager. He dated her for a year and engaged on 13 November 2014. Finally, he tied the knot with her on August 1, 2015. He has recently become a father of a daughter on September 1, 2018.

Who is Declan Donnelly?

Furthermore, he has been successful TV presenter on various TV shows like Byker Grove, SMTV Live, Britain’s Got Talent and Poker Face.

Declan Donnelly was born in Newcastle-upon-Tyne, England, the UK on September 25, 1975. He was born to Irish parents,  Alphonsus and Anne Donnelly and is among the seven children ( three sisters: Patricia, Moyra and Camalia and three brothers: Martin, Eamonn, and Dermott).

He holds both the English and British nationality and of Irish ethnicity.

Also Read: Biography of Rick Edwards and know his ethnicity, relationship, education and many more.

He first enrolled at St Michael’s Roman Catholic Primary School and later received 8 GCSEs from St Cuthbert’s High School. Furthermore, there is no such information regarding his college or university he has attended.

Donnelly started his career from an English TV series ‘Byker Grove’ in 1989 for which he has auditioned after a suggestion from his father. Here he met his partner MCpartlin. The duo decided to depart from the show in 1993. Their friendship started flourishing both in and off the screen.

Later, they were seen hosting comedy shows like Ant and Dec, Ant and Dec’s Saturday Nights Takin 2002 and Children show, SMTV Live. After that, the duo was seen in various TV game shows, talent shows and reality shows such as  Friends Like These, PokerFace and Push the Button, Pop Idol, and Britain’s Got Talent,  I’m a Celebrity… Get Me Out of Here!, and Ant & Dec’s Saturday Night Takeaway. Furthermore, they were seen in a TV series entitled ‘No Hiding Place’ and in the film Alien Autopsy in 2006.

He has won various awards including British Comedy Awards, TrIC Awards, RTS Awards, and British Academy Children’s Awards among the others. Of all his various contract and deals he has an estimated net worth of $60 million.

Also Read: Biography of Stephen Dixon and know his ethnicity, relationship, education and many more.

Declan Donnelly has busy receiving congratulation and best wishes for his recently born daughter on September 1, 2018. However, he has not created controversy but one of friend Phillip Schofield created controversy because of choice words to congrats Donnelly on social media saying, ‘CONGRATULATIONS! Now you’re a family’. Philip received some backlash from Donnelly’s followers.

Donnelly stands 5 feet and 5 inches tall and his weight is unknown. He has brown color eyes and black color hair.