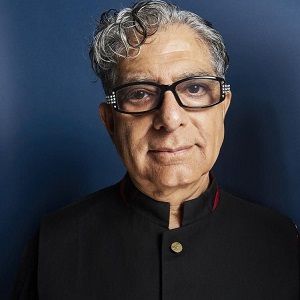 I would love to see Oprah as president.

I think, sometimes, your harshest critics can be your best friends in a sense," Chopra said, if you don't take them personally, they're giving you feedback.

Deepak  Chopra is a married man. He is married to Rita Chopra. They married in the year 1970. They are blessed with two children Mallika Chopra and Gotham Chopra. Similarly, he has three grandchildren. He is not divorced and lives in Manhattan.

Who is Deepak Chopra?

He was born on 22nd October 1946 in New Delhi, British India. He is the son of Krishan Lal Chopra and Pushpa Chopra. Similarly, his father was a prominent cardiologist, head of the department of medicine and cardiology. His father worked at New Delhi’s Moolchand Khairati Ram Hospital for over 25 years.

Similarly, he has a brother Sanjiv Chopra who is a professor of medicine at Harvard Medical School and on staff at Beth Israel Deaconess Medical Center. Likewise, his nationality is Indian-American and his ethnicity is Asian.

Talking about her education, he attended All India Institutes of Medical Sciences and St. Columba’s School.

He became licensed physician and chief of staff at the New England Memorial Hospital (NEMH) in 1980. Similarly, he met Maharishi Mahesh Yogi in the year 1985 and became involved with the Transcendental Meditation movement (TM). But, he resigned his position at NEMH shortly and established the Maharishi Ayurveda Health Center.

Similarly, he gained a following in the year 1993 after he was interviewed on The Oprah Winfrey Show about his books. But, he then left the TM movement to become the executive director of Sharp HealthCare’s Center for Mind-Body Medicine. In the year 1996, he co-founded the Chopra Center for Wellbeing.

Likewise, Philosopher Robert Carroll states Chopra attempts to integrate Ayurveda with quantum mechanics to justify his teachings. Chopra argues that what he calls “quantum healing” cures any manner of ailments, including cancer, through effects that he claims are literally based on the same principles as quantum mechanics.

Now talking about his books, he has written The Seven Spiritual Laws Of Success, Perfect Health, The Book of Secrets and many more.

Talking about the awards, Deepak received the Quill Award for Religion/Spirituality.

Similarly, He has not revealed her incomes and salary. But he has the estimated net worth of $50 million. Similarly, he lives in a $14.5 million “health-centric” condominium in Manhattan.

Deepak Chopra gave his statements about the healing of human beings via Ayurveda and Quantum Mechanisms. His statements were dismissed by many and they even said that he was lurking away sick individuals off medical treatment. He got a lot of criticism for his work.

Similarly, his usage of the word “Quantum” in medicine as a metaphor had created a lot of problems amongst Physicists. Also, he is referred to as the controversial new age guru.

Talking about the body measurements of Phillip, he has a decent height and weight. His hair color is salt and pepper and he has black color eyes.