Deidre Hall is an American actress. She is best known for her portrayal of Dr. Marlena Evans on NBC's daytime drama Days of Our Lives. 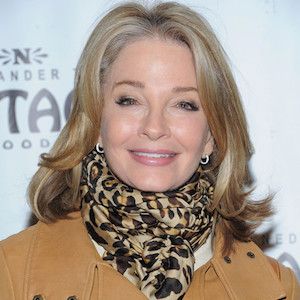 There was never a point in my life where I gave up. My marriage, as you know, fell apart

I have learned survival secrets from being on camera, and then translated them into everyday life

Deidre Hall at the moment is unmarried. She got married four times though. She married William Hudson who is also an actor in 1966 and they separated in 1970.

She then married Keith Barbour in 1972. Keith is an American singer and songwriter. The couple separated in 1977.

Then she married Michael Dubelko in 1987. Her third husband is a film producer. The marriage lasted for two years and ended in 1989.

She finally got married to Steve Sohmer in 1991. Sohmer is a Shakespearean Scholar and author of fiction and nonfiction books, a television writer and producer, and former network television and motion picture executive.

Their marriage lasted for more than 15 years when the couples finally separated in 2006. The venues of her marriage ceremony are not known.

Hall has two sons David Atticus Sohmer(1992) and Tully Chapin Sohmer (1995) through surrogation because she couldn’t conceive herself due to her internal body abnormalities. The Surrogate mother of the two children is Robin B., a divorced mother of three who has striking resemblances to Hall.

Who is Deidre Hall?

Deidre Ann Hall or simply Deidre Hall is a soap actress from America. Deidre Hall’s character as Dr. Marlena Evans on NBC’s daytime drama Days of Our Lives which she played for over forty years is so popular that it has created a furor and a fan following, making her one of America’s most beloved actress.

The actress last appeared in lead roles in the web series Dating in the Middle Ages (2013) and hallmark channel movies Lucky in Love (2014) and My Christmas Dream (2016).

Deidre Ann Hall was born in Milwaukee, Wisconsin on 31 October 1947. Her father John Hall worked at Lake Worth Post Office and her mother Jean Hall an immigrant from Scotland was an executive secretary for an insurance company in Connecticut.

Deidre’s family moved to Lake Osborne Estates in 1957 when her father signed on with the Lake Worth Post Office. She studied at Lake Worth High School and graduated in 1965.

Third of the five children in her family, Deidre Hall is has a twin sister named Andrea Hall, and her brother’s name is John Terry Hall. She was elected Junior Orange Bowl Queen at the age of 12.

She was interested in psychology before she opted out of her acting career.

She studied at Lake Worth High School and graduated in the year 1965. She continued her study at Los Angeles City College in psychology until she shifted her career to professional acting.

During this period she tried her luck at modeling and commercial and soon she began appearing on television shows just to realize that acting was her serious career.

Deidre Hall’s career in the media started in 1952 when she first appeared with her sister Andrea, in press materials for the 1952 Hudson Twin H-Power Engine.

While attending Palm Beach Junior college in her late teens, she landed modeling jobs and commercials through an agent. Soon she started appearing in television shows.

She has appeared on more than 40 TV series and episodes since then including Electra Woman and Dyna Girl, Emergency, Days of Our Lives, S.W.A.T to name a few. She also tried her luck writing with her partner Lynne Bowman and wrote Deidre Hall’s Kitchen Closeup in 2010.

She has also been nominated for numerous Soap Opera Digest awards throughout her career.

She often came into controversies because of her off-camera marriages and romances. She has married four times till now and has two surrogate children David and Tully whose surrogate mother is Robin B.

Deidre Hall has a voluptuous body. He has a height of 5 feet 7 inches tall and weighs 57 kg. Her vital statistics are 37C-23-36 inches.

The color of her hair is dyed blond and she has hazel color eyes. The size of her dress and shoes is unknown. Her shoe size is 8 (US) and her dress size is unknown.