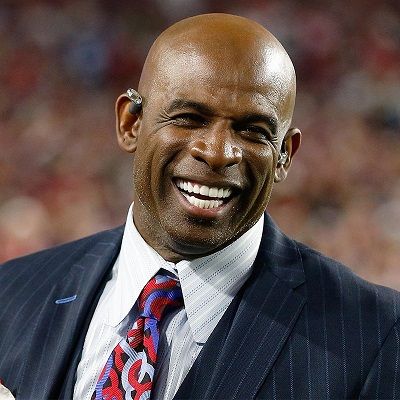 If your dream ain't bigger than you, there's a problem with your dream

Water covers two-thirds of the Earth. I cover the rest

His first marriage was with Carolyn Chambers in 1989. Deion and Carolyn have two children; Deion Sanders Jr.(Son) and Deiondra Sanders(Daughter). The couple divorced in 1998, nine years after their marital affair.

His second marriage with Pilar Biggers lasted for 14 years(1999-2013), he has two sons; Shilo Sanders and Shedeur Sanders, along with a daughter named Shelomi Sanders.

Who is Deion Sanders?

Sanders was born Deion Luwynn Sanders Sr. on August 9, 1967, in Fort Myers, Florida, America. He is the son of Mims Sanders and Connie Knight. He grew up with his sister Tracy Knight. Sanders is of American nationality and is of Afro-American ethnicity.

After his senior year in Florida State, Sanders ended up being drafted twice. He was picked by the New York Yankees in the MLB Draft and selected by the Atlanta Falcons in the NFL Draft.

Sanders decided to do what he had always done, play both, instead of choosing one over the other. He played a part-time, sporadic baseball career, playing over nine seasons for four teams. In 2001, he completed his baseball career.

Sanders quickly established himself as one of the best defensive players in the NFL after becoming Atlanta’s first-round pick in 1989.

With his “high stepping” and elaborate touchdown celebrations, he also developed a reputation as a flashy and cocky player. He played five seasons with the Falcons, not only recording 24 interceptions but also becoming one of the elite return men of the NFL.

He grabbed five interceptions with the Ravens in total before retiring after the 2005 season. For 1,331 yards and nine touchdowns, 155 kickoff returns for 3,523 yards, 212 punt returns for 2,199 yards, and 60 receptions for 784 yards, he finished his career an eight-time Pro Bowler with 53 interceptions.

On 31 January 2019, his documentary titled Deion’s Double Play was aired which was about how he played an NFL game for the Atlanta Falcons in between two MLB games for the Atlanta Braves in twenty-four hours.

Sanders has a fair share of awards in his name. He was named All-American in college football in 1987. In 1988 he received Jim Thorpe Award as the best defensive back. And again in 1989 he became the only athlete in modern history to score a touchdown and hit a home run in professional play during the same week.

Sanders has an estimated net worth of over $41 million as of 2019. In addition, he earns about $65,000 as a sports analyst as his annual salary from the NFL Network and CBS Sports.

In 2011, Deion was allegedly involved with a 19-year-old mistress. Her name was Aleea Lee and she is a twitter model.

Sanders has an athletic physique and clean shaved. He stands at a height of 6 Feet and weighs around 93 Kgs. Like-wise he has black hair which he keeps short and also he has black eyes.