Who is Deion Sanders Jr. Dating?

Currently, Deion Sanders Jr. is single and is not seeing anyone. There is no info available on his past as well as present relationships.

His father, Deion Sanders married his mother, Carolyn Chambers in 1989.

During their togetherness, they became parents to two children named, Deion Sanders Jr. and Deiondra Sanders.

Later, the coupled ended their nine-year of marriage via divorce in 1998. 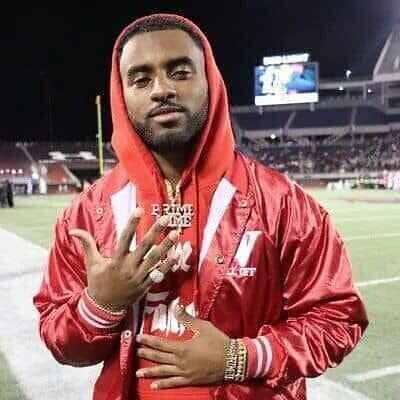 Who is Deion Sanders Jr.?

Deion Sanders Jr. was born in Texas, the United States on December 1, 1993. Sanders Jr. is 28 years old as of 2022 holding the American nationality. He maintains All-American ethnicity and has a Sagittarius birth zodiac sign.

He has a sister named, Deiondra Sander and half-siblings, Shilo Sanders, Shedeur Sanders, and Shelomi Sanders.

Moreover, he completed his schooling at Atlanta Sports Academy.

Deion Sanders Jr. spent his high school year at the Atlanta Sports Academy. During his time in Atlanta, he became a 3-star collegiate recruit and lettered in both track and football.

Then, he played as a cornerback and wide receiver on the behalf of Southern Methodist University Mustangs football team.

In 2014, he was named as a kick returner to the 2nd team All-American Conference as a sophomore season. He is on the way to accumulating more careers.

However, on the other hand, his father, Deion Sanders has accumulated a successful career as a retired American football player and baseball player and sports analyst.

After his senior year at Florida State, Sanders ended up being drafted twice. He was picked by the New York Yankees in the MLB Draft and selected by the Atlanta Falcons in the NFL Draft.

Sanders decided to do what he had always done, play both, instead of choosing one over the other. He played a part-time, sporadic baseball career, playing over nine seasons for four teams. In 2001, he completed his baseball career.

Sanders quickly established himself as one of the best defensive players in the NFL after becoming Atlanta’s first-round pick in 1989.

With his “high stepping” and elaborate touchdown celebrations, he also developed a reputation as a flashy and cocky player. He played five seasons with the Falcons, not only recording 24 interceptions but also becoming one of the elite return men of the NFL.

He grabbed five interceptions with the Ravens in total before retiring after the 2005 season. For 1,331 yards and nine touchdowns, 155 kickoff returns for 3,523 yards, 212 punt returns for 2,199 yards, and 60 receptions for 784 yards, he finished his career an eight-time Pro Bowler with 53 interceptions.

On 31 January 2019, his documentary titled Deion’s Double Play was aired which was about how he played an NFL game for the Atlanta Falcons in between two MLB games for the Atlanta Braves in twenty-four hours.

Sanders has a fair share of awards in his name. He was named All-American in college football in 1987. In 1988 he received Jim Thorpe Award as the best defensive back. And again in 1989, he became the only athlete in modern history to score a touchdown and hit a home run in professional play during the same week.

The net worth of Deion Sanders Jr. is estimated to be between 1 to 5 million USD while the annual salary he is paid has not been disclosed.

Deion Sander Jr. has not faced any sorts of serious rumors and controversies. He has well maintained his professional as well as personal life.

Initially, he stole the limelight as the son of Deion Sanders.

The body measurements of a footballer, including his height, weight, chest, waist, and hip size are not available at the moment.

In addition, Deion Sander Jr. has a dark complexion along with black hair and eyes of the same color.

Deion Sander Jr. is active on social media platforms with huge fan followings. He has an Instagram account under the username, @deionsandersjr and has more than 207K followers.

In addition, his Twitter account is enriched with over, 81K followers. Also, there is an official Facebook page under his name that has garnered around 5.1K followers.

Additionally, he has a Tiktok account, having about 196.3K followers and 3.9M likes.