Updated On January 18, 2023 | Published By: Brandy Stratton
Share this
In Relation 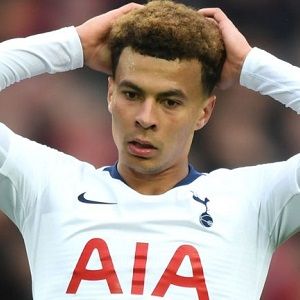 Everyone likes a bit of competition.

You always look to impress.

Their romance rumors were confirmed after they were snapped getting cozy over a yacht vacation in Capri, Italy.

As they were seen together at London’s Libertine Club. Later in April 2016, she was seen at his birthday party.

He was previously in a relationship with Ruby Mae. They started dating in June 2016.

His ex-girlfriend was seen regularly in the stands for Spurs and England soccer matches.

However, they split in early 2019. They have not been clear about the reason for their break up.

Who was Dele Alli?

He plays as a midfielder for the Premier League club Tottenham Hotspur and the England national team.

He is considered the world’s most expensive midfielder from a transfer value perspective by the CIES.

He was born on 11th April 1996 in Milton Keynes, England. He is the son of Kehinde Alli who was a Yorba Nigerian and English mother Denise.

His father is a businessman and his mother’s profession is unknown.

His full name is Bamidele Jermaine Alli and his nicknames are Bam Bam, The Delstroyer, and so on.

Similarly, he has a brother and a sister. His brother’s name is Harry Hickford and his sister’s name is Molly Hickford.

Likewise, his nationality is British whereas his ethnicity is mixed(English-Yoruba Nigerian).

Talking about his education, he attended Stantonbury Campus and The Radcliffe School in Wolverton.

Dele Alli is a midfielder for the Premier League club Tottenham Hotspur. When he was 11 years old, he joined the youth system at Milton Keynes.

Similarly, in the next two-and-a-half years, he made 88 official appearances for the team, scoring 24 goals.

Finally, he signed for Tottenham Hotspur in February 2015 for an initial fee of £5 million.

He was being loaned back to the Dons for the remainder of the season.

In the first two campaigns at White Hart Lane, he has voted the PFA Young Player of the Year and made the PFA Team of the Year.

In the year 2015, he made his first start for the England senior team.

As he scored the opening goal from a long-range shot to beat Spurs teammate, goalkeeper Hugo Lloris in a 2–0 win against France at Wembley Stadium.

After that, he was selected for UEFA Euro 2016 and the 2018 FIFA World Cup, helping England to the semi-finals of the latter.

He was awarded the EFL Young Player of the Season.

He was awarded the Man of the Match in the 1-1 draw between rivals Arsenal and Tottenham.

Dele Alli has an estimated net worth of $9 million. Similarly, he is currently earning £60,000 per week.

Likewise, he is likely to sign a new deal that will see his weekly wage rising to £100,000.

He owns a 5BHK mansion in Elstree, Hertfordshire, and luxury cars including Range Rover, Mercedes, and Rolls Royce.

Once the England star was blasted by football fans after he was filmed angrily ranting at staff at a five-star hotel.

Likewise, he was filmed on a mobile phone alongside England teammate Ross Barkley as he argued with a receptionist in the foyer of The May Fair Hotel in central London.

The video went viral branding him as arrogant and overpaid.

Dele Alli has a height of 6 feet 2 inches and weighs around 78kg.

His hair color is black whereas he has dark brown eyes.

His chest, waist, and biceps sizes are 38-32-14 inches respectively.