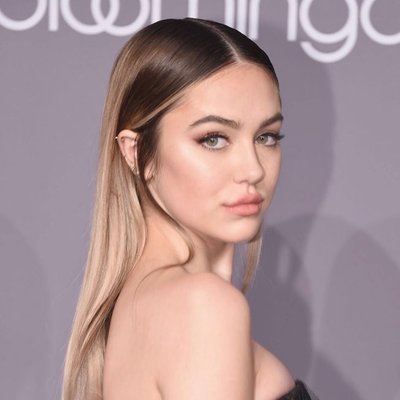 Delilah Belle Hamlin has been involved in multiple relationships. In the past, she dated Aidan Reilly, Cully Smoller, and Jay Alvarrez. However, she is currently linked to a handsome hunk, Eyal Booke. The couple has been spotted several times and usually posts videos in which both of them can be seen together.

They were also spotted on Halloween as they arrived at Kendall Jenner’s birthday celebration. Delilah is also diagnosed with Epstein-Barr virus, Lyme disease, and encephalitis which she revealed lately.

Who is Delilah Belle Hamlin?

Similarly, she gained the limelight in modeling when she walkthrough with her mother Lisa, and sister, Amelia Hamlin during the Dennis Basso New York Fashion Week. In addition, she is also recognized for her intense beauty and charm.

Delilah is the elder daughter of celebrity parents Lisa Rinna and Harry Hamlin. Her father is an actor and entrepreneur famous for “Clash of the Titans” and “L.A. Law”.

Likewise, her mother is also an actress and television personality popular for her appearance on the reality television series “The Real Housewives of Beverly Hills”.

Similarly, she has two siblings namely Amelia Hamlin and Dimitri Alexander Hamlin. Amelia is a model and Instagram personality and Dimitri is an actor and model.

She holds the citizenship of America and her zodiac sign is Gemini. Regarding her education, she was educated at New York University but stepped out to pursue a modeling career.

Delilah Belle Hamlin has a successful modeling career, having worked with various agencies and featured in publications alongside her mother, Lisa. In 2010, she started her acting career from the comedy series ‘Harry Loves Lisa’ as a lead role along with her parents. She has contracted with a New York-based modeling agency.

In 2017, Delilah alongside her younger sister Amelia Hamlin signed a deal with IMG Models. Likewise, she graced the cover of Vogue Japan in February 2018. On February 9, 2020, she walked the runway with her mother and sister, Amelia Hamlin at the Dennis Basso New York Fashion Week. Moreover, she has also been on “The Real Housewives of Beverly Hills,” featuring her mother and sister.

Moreover, she also promoted merchandising items of Tommy Hilfiger. Some of her work on magazines include W Magazine, OK, and Vogue. The mesmerizing appearance of the beautiful girl made everyone fall in love with the glamor girl. Further, she is also recognized for her intense beauty and charm on Instagram.

Speaking on her income, she makes a decent sum of money through her Modeling Career. She has an estimated net worth of around $1M.

There are no rumors or scandals about her personal or professional career. However, she had an accidental overdose from prescription pills.

Delilah has a seductive and hourglass figure with a decent height of 5 feet 7 inches tall. Her weight is roughly 56 kilograms. Likewise, her physical measurements are around 31-22-33 inches. She has light skin, light brown hair, and green eyes.