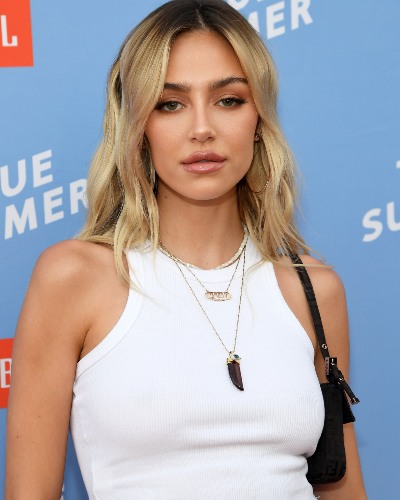 Delilah Belle Hamlin is all set for Christmas! She has declared to her parents what she wants for Christmas. In a deleted TikTok video, she shaded her parents Lisa Rinna and Harry Hamlin by writing,

“Unrealistic things I want for Christmas … for my parents to pay for my trauma therapy.”

In the video, she played Jingle Bell Rock in the background. Likewise, Delilah joked about her mental health struggles in another video saying,

“I’m so sorry that I’ve been acting weird for the past several months. I’m struggling mentally,”

Previously, in November 2021, she talked about her struggle with obsessive-compulsive disorder and anxiety. She had a bad experience with her Xnan prescription after the struggle with mental health. She claimed that her doctor overprescribed her with one medication which one of her friends was taking only 10 milligrams while she was given 20 milligrams three times a day.

Likewise, her doctor also prescribed her 3 milligrams of Xanax a day. As a result of the overprescription, Delilah became a drug addict.

Also read Photos Of Kardashian-Jenner Family Celebrating Christmas 2020; You May Not Want To Miss It!

What is Delilah Belle Hamlin’s age?

Delilah Belle Hamlin was born on 10th June 1998 in Los Angeles, California, USA. She is 23 years old at present. She is the daughter of Lisa Rinna and Harry Hamlin and has two siblings Amelia Gray Hamlin and Dimitri Alexander Hamlin. Her grandparents are Lois Rinna, Frank Rinna, Chauncey Jerome Hamlin, Jr., and Bernice Hamlin.

Also read Who is Danny Taylor? Engagement of Daniel Taylor with Shirley Ballas!

Similarly, she gained the limelight in modeling when she walkthrough with her mother Lisa, and sister, Amelia Hamlin during the Dennis Basso New York Fashion Week. In addition, she is also recognized for her intense beauty and charm. Read more bio…