Dell Curry is an American former professional basketball player. He played in the National Basketball Association from 1986 and retired in 2002. He is married and has three kids. 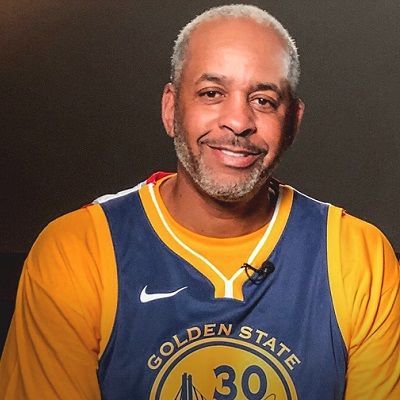 Dell Curry was married to Sonya Adams. She played volleyball at Virginia Tech. Similarly, they met there. They married on 27th August 1988. They have three children.

Likewise, his children are Stephen Curry (son), Seth Curry (son), and Sydel Curry (daughter). His son Stephen plays in the NBA for the Golden State Warriors.

Who is Dell Curry?

Dell Curry is known as an American former professional basketball player. Similarly, he played in the National Basketball Association (NBA) from 1986 until 2002.

Likewise, he currently works as a color commentator, alongside Eric Collins and Stephanie Ready on Charlotte Hornets television broadcasts.

Dell Curry was born on 25th June 1964 in Harrisonburg, Virginia. There is no information about his parents and siblings. Besides, his nationality is American but his ethnicity is African-American.

Talking about his education, he attended the Fort Defiance High School located in Fort Defiance, Virginia where he won a state championship in both basketball and baseball.

Similarly, he then joined Virginia Tech where he became the all-time leader point’s score with 1922. Likewise, he became the McDonald’s High School All-American in 1982.

Talking about his career, Dell Curry was a four-year starter at Virginia Tech in Blacksburg. Similarly, the Hokies appeared in the National Invitation Tournament (NIT) in the year 1983and 1984, finishing third in the latter. But the team qualified for at-large bids to the NCAA tournament in the years 1985 and 1986.

Likewise, it lost in the first round on both occasions. In his senior season in the year 1986, he was named the player of the year in the Metro Conference. Prior to the 1986–87 season, NCAA basketball did not feature a three-point line. His accurate long-range shooting was not rewarded, as it would be later in his NBA career.

Moreover, Curry was selected with the 15th overall pick by the Utah Jazz in the 1986 NBA draft. After that, he played one season in Utah before being traded to the Cleveland Cavaliers in the year 1987.

Dell Curry spent the 1987–88 season. Also, he was selected by one of the NBA’s two newest teams for the 1988–89 season, the Charlotte Hornets, in the expansion draft after he was made available by the Cavaliers.

He won the NBA Sixth Man of the Year Award in the year 1994. Similarly, in 1986 he won Metro Conference Men’s Basketball Player of the Year.

He has an estimated net worth of $8 million. He might earn a huge amount of money. However, his salary and incomes are not disclosed.

He has a house in Charlotte, North Carolina (NC), US.

Talking about Dell Curry’s body measurements, he has a height of 6 feet 4 inches and he weighs around 86 kg. He has salt and pepper color hair and hazel eyes color.