Delta Goodrem is a singer-songwriter and actress.

Delta Goodrem is an unmarried woman until now. She is in a relationship with Matthew Copley. The couple started dating in the fall of 2017.

They are very much in love with each other and she says that she wants to get married to him ‘as soon as possible.’

The couple is planning for their private wedding in country Victoria where only her close friends and family will be invited.

She has been in a number of relationships in her life. From 2002 to 2003, she dated actor Blair McDonough.

After that, she dated a famous Australian cricket player Brett Lee for a short time in 2003. In 2004, Goodrem began a nine-month relationship with Australian tennis player Mark Philippoussis.

Later in 2004, she began dating singer-songwriter, Brian McFadden. The couple got engaged in 2007 and ended their relationship in 2011. 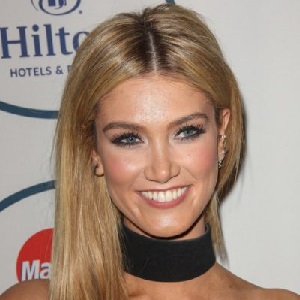 Sport was my absolute love. It was very sporty household. We had my - my brother and I both loved sports

I'm thankful for my songs being at the top of the charts but I am human - I think people still have to remember that.

Who is Delta Goodrem?

Delta Goodrem is an Australian singer-songwriter and actress. She is best known for her hit debut album Innocent Eyes (2003), which topped the ARIA Albums Chart for an all-time.

Her debut album became one of the highest-selling albums in Australian history. Goodrem has sold over eight million albums globally and won three World Music Awards.

Goodrem was born on 9 November 1984, in Sydney, New South Wales, Australia. Her birth name is Delta Lea Goodrem. Her parents are Denis Goodrem and Lea Goodrem, who are now divorced.

She has a younger brother named Trent Goodrem, who is an Australian football player with the Central District Football Club.

Her nationality is Australian and she is of Scottish and English ethnicity. Goodrem attended Hills Grammar School. She had an interest in music since her childhood age.

Delta Goodrem began her career as a child actress at a very young age. At the age of seven, she appeared in an American advertisement for the Galoob Toy Company.

After that, she signed an artist development deal with an independent label, Empire Records.

From June 1999 to September 2000, she worked on thirteen tracks for an album called Delta. When she was 15 years old, she signed a record deal with Sony and released her debut single, “I Don’t Care“.

She released her debut album Innocent Eyes in 2003, which topped the ARIA Albums Chart for an all-time record of 29 consecutive weeks.

Her album also reached number two on the UK Albums Chart. Her second studio album Mistaken Identity was released in 2004.

Goodrem has a total of nine number-one singles and 17 top-ten hits on the ARIA Singles Chart. She has sold over eight million albums globally.

Her album Delta (2008) won the highest-selling album in 2008. She recently appeared in the TV series House Husbands in 2017.

Goodrem is a very talented singer, Her fantastic career has brought her a fortune. She has made a net worth of $21.3 million AUD.

Delta was criticized by the audience and competitors during her time on The Voice Australia. Currently, there are no desperate rumors regarding her personal and professional life.

Delta Goodrem has a height of 5 feet 10 inches with a bodyweight of 62 kg. Her hair color is blonde and her eye color is blue. She has a well-shaped body of 36-25-36 inches.

She also has a YouTube channel with 193k subscribers.

You may also like Michele Tafoya, Lindsay Rhodes, and Scott Van Pelt.

Delta Goodrem is on her way to dating English Singer Seal Amid. Any rumors on her other relationship!!!

Rebel Wilson is back with her bright smile after winning the defamation case! Wilson to be awarded TEN millions after the win!