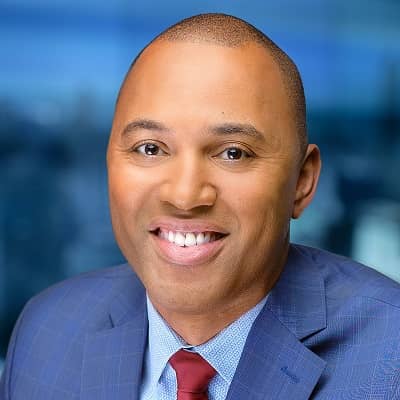 The duo dated for a while and get married. They didn’t share their dating news and disclosed their relationship only weeks before they were married. The marriage ceremony was held with their close friends and family at the Salvage One in Chicago on 21 December 2014.

Demetrius and Erin have twins’ daughter, Harlow Winter and Hadley Walker. They were born through the in-vitro fertilization process on May 2, 2016. Erin wasn’t able to carry their baby due to her complicated health condition and had to search for a surrogate.

Besides his own kids, Ivory also has two step-children from his wife’s previous relationship.

Who is Demetrius Ivory?

Demetrius Ivory is an American meteorologist. He works as the weekdays Morning News weather anchor at WGN-TV.

Before it, he used to work as a weather reporter for Channel 4 Action News This Morning at WTAE.

Demetrius was born on August 14th, 1975, in Ohio, United States of America. He holds an American nationality and is of Afro-American ancestry.

He was raised by a single mother, Jackie Ivory Williams. Demetrius has two brothers named Josh Ivory and Brandon Ivory. His brother Josh is a popular basketball player who plays for Chicago-based R.A.W. Athletics.

Ivory graduated from Ohio State University. He finished his degree in atmospheric sciences and a minor in computer science. Moreover, just after his graduation, he settled his first job at  WYTV in Youngstown as a meteorologist.

Demetrius is a certified meteorologist. Soon after his graduation, he worked in WYTV. Then he functioned as the weather reporter at WTAE at “Channel 4 Action News This Morning” in Pittsburgh, Pennsylvania. There he was in a group with Micah Materre, Lauren Magiera, and Lauren Jiggetts.

With the experience in that field, he joined WGN Weather Center as a meteorologist in 2013. It was the year he entered the TV station.  As of now, he works as the weather anchor for WGN Midday News and WGN Evening News at 4 p.m. WGN-TV  is an independent television station sanctioned to Chicago, Illinois, United States. Moreover, it is own by the Nexstar Media Group.

The famous meteorologist has also been named Best Weatherperson by Pittsburgh Magazine consecutively since 2008.

The anchor has maintained a distance from being in any type of rumors and controversies.

Demetrius stands at a height of 6 feet. Talking about his facial appearance, he has black colored hair with black eyes.

The meteorologist is active on various social media sites. He joined Twitter in May 2009 and has over 13K followers as of Dec 2020.

Also, get to read the biography of other anchors like Carol Silva, Abby Hornacek, Tracee Carrasco, and James Rubin.