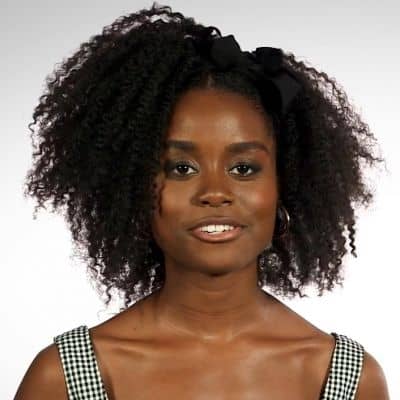 Who is Denée Benton Married To?

Besides that, there is no further info opening up about her past relationships.

Who is Denée Benton?

Denée Benton is an American actress and singer. She earned a Tony Award nomination for her appearance as Natasha Rostova in 2016 Broadway’s Natasha, Pierre, & The Great Comet of 1812.

Besides that, her television appearance includes UnREAL and The Gilded Age.

Denée Benton was born in the United States on December 31, 1991. Benton is 31 years old as of 2022 and holds an American nationality.

According to astrology, she has a birth zodiac sign of Capricorn. She maintains African-American ethnicity. In addition, Denée Ayana Benton is her full birth name.

Benton was born to her father,  Jackie Benton, and mother, Derryl Benton. There is no info disclosed about her siblings.

Moving towards her educational life, she went to Trinity Preparatory School based in Winter Park, Florida to complete her schooling. Later, in 2014, she graduated from Carnegie Mellon University.

Denée Benton started her early career as Nabulungi in the U.S. national tour of The Book of Mormon and the West End.

Later, she portrayed Natasha Rostova in 2016 Broadway’s Natasha, Pierre, & The Great Comet of 1812. After the opening of the show at the Imperial Theatre on November 14, 2016, she made her Broadway debut.

During the Musical nomination she even earned Tony Award for Best Actress for her portrayal in the show. On December 12, 2016, she discussed the role on ‘The Late Show with Stephen Colbert.’

Her fame soared after portraying Ruby Carter the season 2 of the drama series, ‘UnREAL’ which aired on Lifetime on June 6, 2016. Though, Benton was played ‘Eliza Hamilton in the Broadway production of Hamilton she later left the show on February 24, 2019.

Talking about her most recent projects, she has landed a recurring lead role as Peggy Scott in the second season of the historical drama series, ‘The Gilded Age’ which renewal was announced in February 2022. The show has not been released yet.

Benton was also announced to be part of 22 productions of Stephen Sondheim’s ‘Into the Woods at the New York City Center. She would be portraying the role of Cinderella in it.

Then, she made her movie debut by appearing as Charlotte in the bio-drama movie, ‘Our Friend’ in 2019.

Gabriela Cowperthwaite is the director while Brad Ingelsby is the writer of this movie.

As of 2022, Denée Benton has an estimated net worth that ranges between 1 to 5 million USD while her monthly/yearly salary is still under review.

Denée Benton has not been part of any rumors and controversies up to date. Being able to maintain a clean profile, she has well-balanced his professional as well as personal life.

It seems like Benton prefers to stay out of the limelight.

Denée Benton is 5 feet 6 inches tall weighing around 50 Kg. Moreover, her body measurements are 32-27-32 which means she has a bust and hips size of 32 inches while her waist size is 27 inches.

Furthermore, With a dark complexion, she has a couple of black eyes and hair of the same color as well.

Talking about the social media presence of Denée Benton, She has an Instagram account under the username, @deneebenton which is enriched with more than 42.5K followers while her Twitter account has garnered over 11.4K followers.