American actor, singer, and author. Denis O'Hare is widely famed for his award-winning performances in the plays, Take Me Out, and Sweet Charity.

Denis O’Hare has openly stated he is gay. Talking about his relationship details, O’Hare is happily living a married life with designer, Hugo Redwood. The couple tied the knot on 28 July 2011.

Additionally, they have adopted a son, Declan. Other than that, Denis has been secretive towards his relationship details and related news. 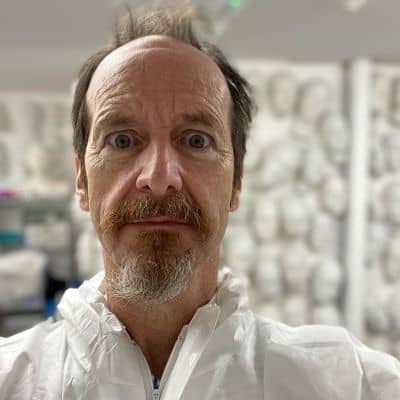 Who is Denis O’Hare?

Denis O’Hare is a well-recognized American actor, singer, and author. Denis O’Hare is widely famed for his award-winning performances in the plays, Take Me Out, and Sweet Charity, as well as portraying vampire king Russell Edgington on HBO’s fantasy series, True Blood.

Moreover, he is also famous for his roles in movies such as Charlie Wilson’s War, Milk, Changeling, and Dallas Buyers Club.

Denis O’Hare was born on 17 January 1962. At present, he is 60 years young star. Likewise, his birthplace is Kansas City, Missouri, the USA.

Denis is the son of his father, John M. O’Hare whereas his mother is Margaret Karene. Moreover, he has three sisters named Pam, Patricia, and Kathleen, and a brother, Michael.

Talking about his nationality, O’Hare holds an American identity whereas his ethnicity is English, Irish.

Regarding education, the star was in his school’s choir, and in 1974 he went to his first audition, earning a chorus part in a community theatre production of Show Boat. O’Hare then attended Northwestern University in 1980.

Denis O’Hare won a Tony Award for Best Performance by a featured actor in a play for his performance in Richard Greenberg’s Take Me Out, where his character’s lengthy monologues in which he slowly falls in love with the game of baseball. O’Hare won the 2005 Drama Desk Award for Outstanding Featured Actor in musical for his role as Oscar Lindquist in the Broadway revival of Sweet Charity.

Moreover, O’Hare played a doctor in 21 Grams. He portrayed the role of Charles J. Guiteau in the Broadway production of Stephen Sondheim’s Assassins, for which he was nominated for the Best Performance by a Featured Actor in a Musical Tony Award.

He was then featured in the Hallmark Hall of Fame presentation of Saint Maybe. Denis then appeared as a guest star on several episodes of Law & Order and its spin-offs, Law & Order: Special Victims Unit, and Law & Order: Criminal Intent.

In 2008, the actor emerged as a guest star on many episodes of Brothers & Sisters. His guest appearance includes The Anniversary Party, 21 Grams, Garden State, Derailed, Michael Clayton, A Mighty Heart, Half Nelson, Milk, Edge of Darkness, Charlie Wilson’s War, and Changeling.

A famed American star, Denis O’Hare has earned a handsome amount of money from his profession. He has been active in his profession from the year 1982 till the present.

As per celebrity net worth, Denis O’Hare has an estimated net worth of $4 million as of 2022.

Denis has never been part of any controversial matter or rumors till now. The star has been preoccupied with his professional and private life.

It seems that O’Hare prefers enjoying his personal life and does not want to merge it with his professional life.

60 years young star, Denis O’Hare has handsome looks and an admirable personality. He stands at a height of 5feet 8inches. Also, he has a balanced body weight of 70 kg.

Furthermore, O’Hare has green eyes whereas his hair is grey.

Regarding his social media presence, Denis O’Hare is an active personality on social media. Denis has more than 167k followers on his official Instagram account @ohdenis.

He is also active on Twitter with around 131k followers.