Denise and singer Robbie Williams were romantically linked to each other after working together on the TV series, TFI Friday in 1997.

In 1998, she dated singer Jay Kay, who was a member of the British jazz band, Jamiroquai, their relationship lasted for 3 years.

Denise van Outen went out with actor and director Nick Moran for a very brief time in 2001 and she later claims that she never referred to him as her boyfriend.

Denise had 4 years long on and off relationship with Richard Traviss, their relationship came to an end in 2005.

In 2007, Denise start dating James Lance and broke up in August of the same year. Besides, Denise has dated Lee Mead in November 2007, both of them got married in an intimate wedding ceremony in April 2009 was officially ended in July 2013 as they separated. In 2015, they officially got divorced. In present, she is dating Eddie Boxshall. 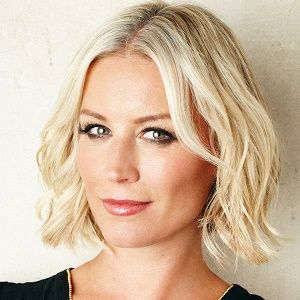 The best thing about having my own show is that I can get as many gorgeous fellas on it as I want to and I do love a sexy fella.

I know what it's like when you're in a long-term relationship, you sort of have pet names for each other's privates. I call Jay's (Jay Kay) Godzilla because he takes me "Deeper Underground".

In my book, you know you're a slapper when the council puts a park and ride sign outside your house.

Who is Denise Van Outen?

Denise Van Outen is a singer, model, dancer, presenter, and English actress who is well known for presenting The Big Breakfast, for finishing as runner-up in the tenth series of the BBC One dancing show Strictly Come Dancing.

Denise is the youngest one among the three children of her parents.

And her parents raised her a Catholic. Moreover, She has a sister named, Jackie Outen and a brother named, Terry Outen in her family. She started modeling when she was seven years old for the knitting patterns.

At the age of 12, she joined Sylvia Young Theater School as a result of which she got a role to play a great drama.

She started her career by appearing as Jill in ITV1’s version of the pantomime Jack and the Beanstalk, during her first stint on the Big Breakfast show. Then she appeared on several episodes of The Bill and The Young Person’s Guide To Becoming A Rock Star, the BBC’s Murder in Mind short series of crime dramas in 1999.

Besides that, in April 2001 She first played Roxie Hart on the stage in the hit musical Chicago at the Adelphi Theater in the West End.

In late April 2002, before returning to the show’s London version, Unknown in the United States, she reprised her role on Broadway in the spring of 2002.

After that,  she returned to the London stage at the Gielgud Theater in Andrew Lloyd Webber’s one-woman show Tell Me on a Sunday, which she reworked for her in 2003.

In 2007, Van played Maureen in London revival of Rent Remixed directed by William Baker until 22 December. van Outen played Mary in Hotel Babylon for the BBC in  July 2009.

As well as on 25 October 2010, Van Outen took over the role of Paulette Bonafonté from Jill Halfpenny in the West End production of Legally Blonde. She co-wrote the one-woman musical play, Some Girl I Used To Know with Terry Ronald in 2013, which she will tour in from January 2014.

It was announced that Van Outen would be joining the cast of EastEnders in February 2015.  she was also one of the four judges on the first season of Ireland’s Got Talent in 2018.

Although she has not received any awards for her work, she has been one of several to set her name in Guinness World Record. She has a record of eating 250 g jelly in 60 seconds with a blindfold on.

Till the date, she has not been a part of controversy and rumor.  She is maintaining her personal life properly. Thus at the current time, there are no such records available.

She Earns  $400 thousand dollars as her yearly income through salary, bonuses, and also from movies fees.

Her estimated net worth is $5 million dollars as of 2022, which she earns from her profession.

She is beautiful with dyed blonde hair color and brown eyes.

Besides, she possesses a slim body type with body statistics of  34-25-34 inches including a height of 5 feet 6 inches and a body mass of 53Kg.

Do not miss to know more about the relationship, birth facts, family, childhoods, rumors, and the bio of Jessica Tyler, Queen Latifah, Joanne Tucker.

The new celebrity health fix! Vitamin B12 jabs! Get the expert opinion on it!