Posted by MarriedBiography Posted on July 27, 2020 | In Married , Net Worth , Relationship
Share this 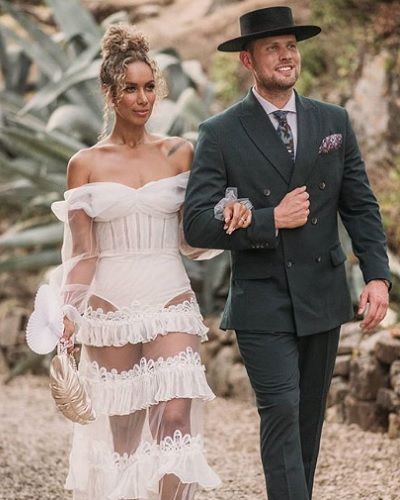 Dennis Jauch is a producer and actor. Dennis is known for TV series Deutschland sucht den Superstar and Little Big Shots. He has appeared in series The World’s Best and Dancing with the Stars. He is a German choreographer and entrepreneur. Previously, he worked as a backing dancer on Leona’s UK tour.

Dennis Jauch and Leona Lewis were dating each other since the year 2010. They lived together in California. They got engaged in November 2018. Likewise, on 27th July 2019, they officially walked down the aisle at a Tuscan vineyard south of Florence, Italy. Their wedding ceremony was held in front of 180 family members and friends.

Leona wore a full-length white tulle gown and walked down the aisle to “Ave Maria.” For the after-party, she changed to a beaded blush dress for the reception and a crystal-embellished jumpsuit. She wore on Instagram,

“Had the absolute best Hen/Bachelorette week with my UK & US ladies in Hawaii. Couldn’t ask for a more supportive, loving, funny, intelligent, incredible group of women to stand by me on my big day.”

They keep sharing each other on social media and flaunt their love for each other. They are together for almost 10 years now and their love is stronger than ever.

Also read Beautycon CEO Moj Mahdara and her work in the beauty industry! Know about her married life with Roya Rastegar and children, social media, biography

Here is a little story about one of the life lessons that my great late papa Lutz has taught me. If your papa is still with you – make sure you really take some quality time out of your day today to see him in person or if you can't, hit him up on FaceTime and talk about your most amazing memories. It will go along way, believe me ?? Here's to Papa Lutz ❤ #FathersDay

“Here is a little story about one of the life lessons that my great late papa Lutz has taught me. If your papa is still with you – make sure you really take some quality time out of your day today to see him in person or if you can’t, hit him up on FaceTime, and talk about your most amazing memories. It will go along way, believe me ????????
Here’s to Papa Lutz ❤ #FathersDay”

Jauch also posts about his mother. He is a family guy and posts about his family and dog. He has posted more than 2.3k followers on Instagram. Talking about his Twitter account he has more than 3.1k followers. He joined Twitter since June 2009. Dennis is also on YouTube. He has not uploaded much on his YouTube. He earned a 1 million contract with Syco Music.

How much is Dennis Jauch’s net worth?

A year later, she earned $9,700,000 from receiving the Five-Album contract with Clive Davis’s record label. Dennis and Leona have a house in Los Angeles, California. Their house is worth $2.25 million. Their house is built in three acres of outdoors. It includes a horse’s paddock, a plush goat pen, and a hotel-style pool with a poolside guesthouse.

Also read Hayden Panettiere moving on from her domestic voilence past! Know about her relationship with Brian Hickerson, Wladimir Klitschko, daughter, net worth, biography

Leona is one of the popular British songwriter, singer, and also the animal welfare campaigner. She is well known for her hit songs and lyrics, Leona Lewis came into limelight after her debut album titled Spirit in 2007. Moreover, the singer has also received national recognition by winning the third series of the X Factor in 2006, along with 1 million recording contract with Syco Music. Read more bio…

Sharon Horgan talks of the time when she was filming TV comedy Divorce in Brooklyn and suffered anxiety and mental problems!
Tags : choreographer Producer