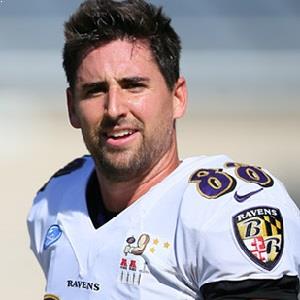 What is the relationship of Dennis Pitta?

Dennis Pitta is a married man. He married Mataya Gissel on July 19, 2008. The pair has three children from the marriage, Decker, Skylar, and Blakely. Dennis met Gissel while attending BYU. The marriage is going strong as there is no news regarding aby extramarital affairs.

Who is Dennis Pitta?

Dennis Pitta is a former American Football tight end. Throughout his career in NFL, he played for the Baltimore Ravens. Previously, he played college football at the Brigham Young University.

Pitta was born in Fresno, California on June 29, 1985, to parents Dennis Pitta Sr. and Linda Pitta. He became interested in the world of football in his childhood years.  His father also played college football. He is of American nationality. Additionally, there are no details regarding his ethnic background at present.

Talking about his education, Pitta attended Moorpark High School in Moorpark, California. Later, he attended Brigham Young University. He graduated with a degree in business education.

Similarly, in the 2008 season, he recorded 83 receptions for 1,083 yards and six touchdowns. Coming to his professional career, the Baltimore Ravens drafted Pitta in the 2010 NFL Draft.

Pitta had seven touchdowns in 2012. He finished the 2012 season with 61 passes for 669 yards and seven touchdowns. Additionally, he had a career-high season in 2016 with 86 receptions and 729 yards. More recently, in the 2017 season, he suffered a hip injury during organized team activities and he was released by Ravens on June 7.

Pitta has not revealed his current salary. However, he has an estimated net worth of $8 million as of 2022.

Pitta’s injuries time and again brought lots of criticism along his way over the years. At present, there are no rumors concerning his life and career.

Talking about his body measurement, Pitta has a height of 6 feet 4 inches (1.93 m). Additionally, he weighs around 238 lb (108 kg). Furthermore, his hair color is dark brown and his eye color is light brown.