Dennis Rodman is an American former professional basketball player. He has played for the Detroit Pistons, San Antonio Spurs, Chicago Bulls, Los Angeles Lakers, and Dallas Mavericks. He is possibly single and has three kids. 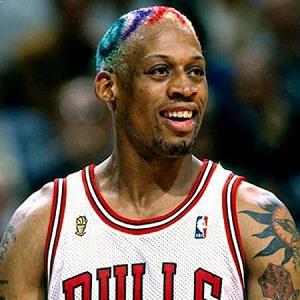 Chemistry is a class you take in high school or college, where you figure out two plus two is 10, or something

This life is like a swimming pool. You dive into the water, but you can't see how deep it is

I didn't want to be known as Madonna's playboy, her boy toy.

Reflecting on the personal life of Dennis Rodman, he has been in a relationship with different personalities. He has been also married for thrice in his lifetime. Previously he was married to Annie Bakes on 28 September 1992 but divorced in 1993. He has one child with Bakes.

He was also in a relationship with Jaimyse Haft in 2003. On 13 May 2003, he married Michelle Moyer and has been blessed with two children. After living several years happily they broke up in 2012. He was also engaged to Alicia Douvall in 2004.

Talking about the present relationship status of Dennis, he is possibly single.

Who is Dennis Rodman?

Dennis Rodman is an American retired professional basketball player in the NBA. He was best known for his fierce defense and his rebounding abilities.

Dennis was nicknamed ‘The Worm’ for his playing performance. He is also an actor as well as an author. He is known for his role in the action movie Double Team.

Talking about early life, Dennis was born on 3 May 1961. He experienced his childhood in Trento, New Jersey. His real name is Dennis Keith Rodman.

He is of African-American ethnicity and has an American nationality.  His parents were Shirley and Philander Rodman Jr. While he was a child, his father left the family and lived in the Philippines.

Dennis has more than 26 siblings from his father’s side. He himself claims that he is the eldest of a total of 47 children.

As per his education, He studied at South Oak Cliff in Dallas, Texas, and attended North Central Texas College. Later, he was transferred to Southeastern Oklahoma State University.

Talking about the career journey of Dennis Rodman, he started playing basketball professionally after being selected by Detroit Pistons in the 1986 NBA draft. During the 1989-1990 seasons, he won the NBA Defensive Player of the Year Award. On 1 October 1993, he was traded to San Antonio Spurs and later again traded to Chicago Bulls.

While playing for the Bulls, he was suspended for six games and fined $20,000 after a head-butting of referee Ted Bernhardt. After being a free agent, he joined Los Angeles Lakers but was soon released after playing for 23 games. In the 1999-2000 seasons, he signed with Dallas Mavericks but soon left the team.

He retired from NBA in 2006. On 26 February 2013, he went to North Korea with Vice Media correspondent Ryan Duffy to host basketball exhibitions.

Besides his NBA career, he is also a professional wrestler who has appeared with his friend Hulk Hogan in World Championship Wrestling (WCW). He has played a tag team match with Hogan against Lex Luger and The Giant which they have lost. He has appeared in an action movie Double Team which gave him three Golden Raspberry Awards for his performance.

Dennis is also an author and has written several books including Rebound: The Dennis Rodman Story and I Should Be Dead by Now.

His success in his career path has paid her well financially making his net worth estimated to be $500 thousand but his salary is unrevealed.

Talking about his rumors and controversy, He was once rumored to be gay and he suffered a controversy when he vowed never to return to North Korea.

Moving towards his body measurements, Dennis Rodman is 6 feet 7 inches (2.01m) and his weight is 100kg. He has black hair color and his eye color is dark brown.