Multiple Academy, Tony and Golden Globe awards winner, Denzel is one of the eminent actors in the industry.

Denzel Washington is a married man as of now. He is in a marital relationship with Pauletta Pearson. They got wedded on January 25, 1983. They started dating a year ago in 1982.

They met for the first time on the set of the show, Wilma. Together, they have four children. They are John David, Katia, and twins Olivia and Malcolm.

Olivia also appeared in the film, The Butler in a minor role. Currently, the whole family lives happily. And there is no sign of any disturbances in their marriage.

Prior, Denzel allegedly had an affair with Joy Philbin in 2002 and actress, Sanaa Lathan. But these are just the rumors. 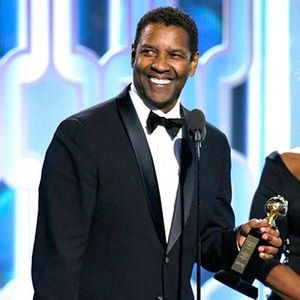 I'm very proud to be black, but black is not all I am. That's my cultural historical background, my genetic makeup, but it's not all of who I am nor is it the basis from which I answer every question

People say, "Congratulations, you finally got the Oscar", and I have to correct them: "Actually, it's my second one. I won for Glory (1989) in 1989." Some people say, "Yeah, but that was for a supporting actor role", but for me, it's the same thing

I remain thankful for the gifts that I've been given and I try to use them in a good way, in a positive way

Acting is just a way of making a living, the family is life.

Who is Denzel Washington?

Additionally, he is also a director and a producer. He possesses American nationality.

Multiple Academy, Tony, and Golden Globe awards winner, Denzel is one of the eminent actors in the industry.

Notably, he is famous for films like Training Day, Glory, The Hurricane, and Fences. In 2016, he received Cecil B. DeMille Lifetime Achievement Award during the Golden Globe award ceremony.

Denzel Washington was born in Mount Vernon in the state of New York.

Similarly; his mother’s name is Lennis Lowe. While his father worked in the water department and as a Pentecostal minister, her mother owned a beauty parlor.  Denzel belongs to the African-American ethnicity.

During his early life at the age of 14, his parents got divorced. At the time of his childhood, he grew up in his hometown, Mount Vernon.

For his education, he attended Pennington-Grimes Elementary School.

Afterward, he joined Oakland Military Academy. Then he also studied at Mainland High School in Florida.

Later, he enrolled at Fordham University. In 1977, he graduated from there with a B.A. degree in Drama and journalism.

Denzel Washington started his career in 1976 in a stage play, Wings of the Morning. The next year, he made his debut in a TV show, The Wilma Rudolph Story.

Then in 1979, he acted in another television show, Flesh & Blood, and a stage show, Coriolanus. Then in 1981, he debuted in a feature film, Carbon Copy as Roger Porter.

In 1987, he rose to fame after he portrayed the role of Steve Biko in the movie, Cry Freedom.

Consequently, he started getting a lot of offers for films, television, and stage shows. Similarly, in 1989, he gave a powerful performance in a war film, Glory. He even won an Academy Award for Best Supporting Actor for his work in the film.

Afterward, he did several movies and television shows. Some of his movies are Heart Condition, Ricochet, Malcolm X, Philadelphia, Fallen, The Siege, and others till 1998.

In the meantime, he acted in TV shows like St. Elsewhere, License to Kill, Great Performances, and others.

Finally, in 2001, he portrayed the character of Detective Alonzo Harris in a thriller film, Training Day.

His performance earned him an Academy Award for Best Actor. He kept on working hard and doing more movies and shows.

More of his films are Unstoppable, Flight, The Magnificent Seven, and so on. Then in 2016, he produced, directed, and starred as Troy Maxson in the drama film, Fences.

The movie made it to the nomination list for the Academy award. In 2018, he is all set to star in the film, The Equalizer 2.

Additionally, he also did stage acts like Julius Caesar, The Raisin in the Sun, and A Soldier’s Play.

As of now, his net worth is estimated at around $220 million.

He made this huge amount of net worth through his high salary.

Denzel Washington had been into controversies in the past.

Furthermore, he insisted that it is because of how a young child is raised. For his comment, he got a lot of hate.

Denzel Washington looks fit and fine. He stands tall at a height of 6 feet 1 inch. And he weighs around 80 kg.

While his hair is black, he has brown eyes.

Similarly, his shoe size is 11. He works out often to stay fit.

Denzel has been active in all sorts of social media. Presently, he has more than 59.1k followers on Twitter. Likewise, more than 419k people follow his Instagram. As for Facebook, his fan page has around 17.2k likes.