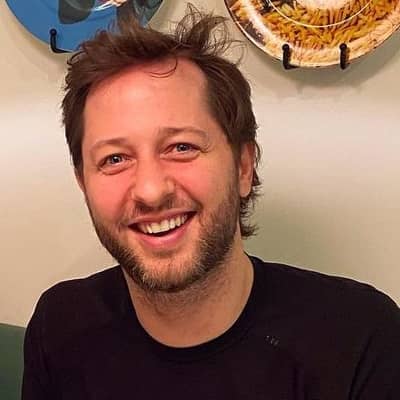 Derek Blasberg’s current relationship status is taken. He is an openly gay person who is in a relationship with a boy named Nick Brown. Nick is a founder of Imaginary.

The pair started dating in 2014. currently, the pair resides in New York together.

Furthermore, no information available regarding his past romantic relationship or boyfriend.

Who is Derek Blasberg?

Derek Blasberg is an American Journalist, New York Times best-selling author, and television personality. He is the host of the television show “CNN Style”.

As of 2018, Derek is the head of fashion and beauty partnership at Youtube and is a senior staffer at Gagosian.

Derek was born on the 22nd of April 1982 in St. Louis, Missouri, United States. He holds an American nationality and is of Caucasian descent. His full name is Derek Charles Blasberg.

He is the son of Bill Blasberg who is a certified public accountant and his mother Carol Blasberg is the managing editor of the medical journal The Annals of Thoracic Surgery. He has a brother named Chris Blasberg.

The journalist attended Affton High School where he was salutatorian of his class and graduated in 2000.

In 2004, he was graduated from New York University with a dual degree in dramatic literature and journalism.

During his college days, Derek worked at the model agency for Elite Model Management where he used to write bios for models. Also, he worked for the European agency Model 1 and has a part-time position at W magazine.

Derek received his first job after graduation as an assistant at Vogue. He is now the editor of V Magazine and VMAN and the founding member of U.S editor at the London based arts publication Garage Magazine.

The writer was associate with various magazines and website,

Besides, Derek released his first book Classy: Exceptional Advice for the Extremely Modern Lady in April 2010. In October 2011, he published a follow-up to classy called Very Class which was an expanded and updated version of the original.

To date, Derek hasn’t surrounded by any sorts of rumors and scandals that hamper his career and personal life.

Derek estimated net worth is around $1 million throughout his multi-profession. However, his salary is still under review.

Apart from that, he earns an estimated amount of $304-$4.9k per month from his Youtube channel. In addition, his estimated yearly income is around $3.6k-$58.3k on his youtube channel.

The Journalist stands at the height of 6 feet tall and his weight is around 78 kg. Likewise, he has dazzling eyes with blue color and he has a brown hair color.

Furthermore, He has a Youtube channel where he has 3.79k subscribers and has more than 10m views to date.