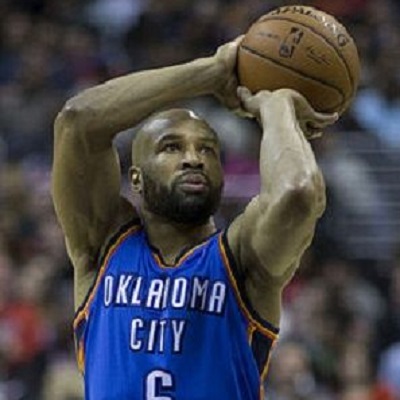 Fisher is currently engaged to Gloria Govan in April 2018. She is the ex-wife of fishers former Los Angeles Lakers teammate Matt Barnes.

Who is Derek Fisher?

He was born on August 9, 1974, in Little Rock, Arkansas, United States. Fisher’s father’s name is John Fisher and mother’s name is Annette Fisher. Fisher is the younger brother of Duane Washington, former NBA player, who is the senior of Fisher for ten years who has also played for the Los Angeles Clippers and New Jersey Nets.

Dereck holds American nationality but is of African Ethnicity.

Fisher registered as a basketball letterman at Parkview Arts and Science Magnet High School. He then graduated with a  Bachelor in Communication from Arkansas University at Little Rock.

With the 24th pick in the draft, the Los Angeles Lakers selected Derek, making him the newest addition to a Lakers team rebuilding towards a championship. General Manager Jerry West also added another young gun to LA’s roster when he traded his starting center, Vlade Divac, to the Charlotte Hornets for the 13th pick in the draft, Kobe Bryant.

The result was a three-year run that established the Lakers as the newest dynasty in the NBA. The Lakers defeated the Indiana Pacers in the 2000 NBA finals, announcing themselves as the new superpower. Fish had established himself as a key cog of a championship club, reaching the highest totals of his career in points, assists and minutes per game.

On 15th July 2004, Fisher joined Golden State Warriors, signing a 6-year contract for a fee of $37 million. Nonetheless, his beginning two seasons were somewhat of a disappointment. In 2006-06 seasons, he averaged 13.3 points a game, the highest season scoring average of his career.

In 2007, Fisher asked to be released from the contract due to his daughter’s health.

On 19th July 2007, Fisher re-joined Lakers, signing a 3-year contract for a worth of $14 million. At the beginning of the 2007-08 season, he contributed a solid season, shooting 40% from the point ranger and 88% from the free throw lines, which considered as his one of the highest percentage of his career.

At the club, he won two more NBA titles along with his teammates Jackson and Bryant.

On 15th March 2012, Fisher joined Houston Rockets. However, after four days he was waived by the club without ever playing for them after he bargained a contract buyout. After clearing waivers, Fisher was eligible to join any team except the Lakers.

On 21st March 2012, Fisher joined Oklahoma City Thunder for the 2011-12 season, after clearing the waiver at 6 pm Eastern time. That night, he made his debut in opposition to the Los Angeles Clippers, scoring 5 points.

On 29th November 2012, Fisher joined Dallas Mavericks and debuted in a 92-77 win against Detroit. He played only 9 games before being injured the patellar tendon in his right knee. On December 22, his request to be released was granted by Mavericks.

On 10th June 2014, Derek began his coaching career, signing a 5-year contract with New York Knicks for a worth of $25 million. He made his coaching debut on 29th October where his team lost 2014-15 season openers to the Chicago Bulls. The next day, he got his first victory as a head coach after his team defeated the Cleveland Cavaliers in 95-90.

On 8th February 2016, Fisher was sacked after the series of Knicks’s losses.

Fishers Net Worth is estimated at around $40 Million. Here is the following Salary he earned during his career in Basket Ball.

This player has been successful in keeping himself away from rumors and scandals.

DerekFisher is 6 ft 1 in (1.85 m) in height and weighs around 91 kg. Fisher has black color hair and dark brown color eyes.