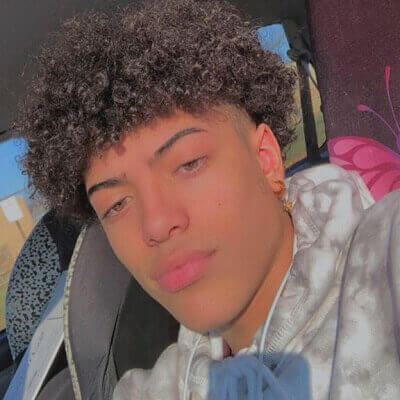 Derek Trendz is currently single. He has thousands of female fans crushing over him but he remains single. He is focused on his studies and his career as a social media personality right now more than relationships.

Also, there is no information about his past relationships and affairs.

Who is Derek Trendz?

Derek Trendz is an American social media personality. He came to the limelight after posting funny videos on Tiktok. He is now a Tiktok star with more than 4.6 million followers and more than 215.7 million likes in his videos.

Derek Trendz was born on July 26, 2003, in the United States of America. As of 2020, his age is 16. There is no information about his parents. His mom does feature in some of his videos and social media posts. However, he has not revealed her name. Similarly, he has not revealed anything about his siblings and other family members.

His ethnicity is Dominican.

Talking about his education, he is a high school student. However, he has not mentioned which high school he goes to. He plays basketball in school.

Derek Trendz has earned a lot of fans all around the globe with the help of his cute looks and funny videos. He has been working hard from the start but he came to the limelight around mid-2019. His videos on TikTok have over 400-500k videos. However, several of his videos have even got millions of views. One example of such a video is titled ‘relatable’. In the video, he has used Dua Lipa’s song, ‘Don’t Start Now. The video has earned more than two million views in that video.

Trendz has represented TC Social Club. His source of income is selling merchandise through Stock Drip Store. He now has more than 4.6 million followers on his TikTok account and has more than 215.7 million likes in total.

Trendz is now on Youtube, too. He joined YouTube in November 2019. As of April 2020, he already has 25.8k subscribers. He has earned a good amount of subscribers in just a few months with just one video posted. The video titled, ‘HOT TAKI CHALLENGE! Never Have I Ever!’ was posted on March 25, 2020, and already has 101k views. The video received a lot of positive responses and many of his fans and followers have asked for more videos in the comment section.

At the age of sixteen, Derek Trendz has an estimated net worth of around $2 million. He does not earn income directly from Tiktok but he also has around 988k followers on Instagram and around 273k subscribers on Youtube. Furthermore, his main source of income is selling his merchandise through Stock Drip Store.

Derek stands at a height of around 5 feet 10 inches. He weighs around 76 kg. His eye color is brown and his hair color is dark brown. There is no information about his shoe size.

The TikTok star has not been involved in any controversies. He has not done anything controversial so far in his career. He has kept himself away from scandals and any kind of controversies. Moreover, he is a well-loved boy with a growing fandom. Similarly, there are no rumors about him.

You may also like to read the Bio, Career, Net Worth, Social Media, Relationships, Body Measurements, and more about Elijah Wireman, Olivia Ponton, Desiree Montoya, and more.