Derrick Favors is a well-known American professional basketball player. He is best known as the player of Utah Jazz wearing a jersey number 15. He is married to his longtime girlfriend Shivolli DaSilva. He is the father of two kids. 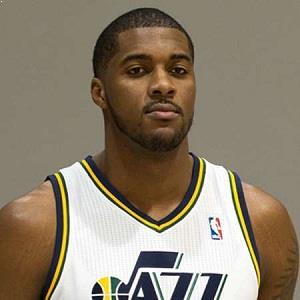 Derrick Favors is married to his long-term girlfriend Shivolli DaSilva.

Reflecting on the personal life of Derrick Favors, he is a married man. He is married to his longtime girlfriend Shivolli DaSilva. There is no information on his marriage date or details.

Shivolli is an entrepreneur and owns a business named Volli Production, LLC.

He is the father of two children. In 2015, the couple welcomed twin baby girls namely Serenitee Favors and Sanaa Favors.

This couple was again blessed with a baby boy named Derrick Favors Jr. in 2017.

Who is Derrick Favors?

Derrick Favors is a well-known American professional basketball player. He is best known as the player of Utah Jazz wearing jersey number 15.

Derrick was born in Atlanta, Georgia on 15 July 1991. He is of African American ethnicity and has American nationality.

He has an elder sister Tiffany and a younger brother Brandon. They all were raised together.

For his schooling, he joined South Atlanta High School where he was ranked the number 1 player in the country by Scout.com in 2009, number 2 in the ESPNU100, and number 4 by Rivals.com.

After graduating from high school, he attended Georgia Tech in January 2009.

He is active on the sports field since 2010 and he is still active in playing.

His career took on a successful path when he was selected to play professionally. He came to fame with his outstanding performance in the games.

After playing a year from the Nets, he was traded to Utah Jazz along with Devin Harris in exchange for Deron Williams on 23 February 2011.

On 19 October 2011, he signed a four-year contract extension with the team and he is still playing from there.

He signed a shoe deal with Adidas just before the 2010 NBA draft and has been loyal to Adidas since he was 15.

This player has also the skills of a businessman. Along with his wife, Favors has opened Minky Couture’s luxury blankets, S&S Lux.

Except for his trade rumor, he has not suffered other rumors and controversy.


Derrick Favors has a height of 6 feet 10 inches.

His body weighs 120kg. he has black hair and black eyes.