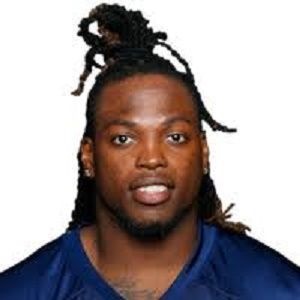 As of 2018, Derrick Henry is unmarried, he is dating Adrianna Rivas. Both of them are having a good relationship and enjoying their life.

Hope soon they will get married.

Who is Derrick Henry?

Derrick Henry is an American football running back who plays for the Tennessee Titans of the National Football League. He has played college football for the Alabama Crimson Tide. There, he was drafted in the second round of the 2016 NFL draft by the Titans.

An American football running back was born on January 4, 1994, as Derrick Lamar Henry Jr. in Yulee, Florida. He is 27 years old.

His father is Derrick Henry Sr. and his mother is Stacy Veal. His siblings are unknown.

He was interested in playing football from his early days.

He attended the University of Alabama and majored in Communications.

He began his professional career by playing as a running back for the Yulee Hornets football team. In 2009, he ran for 2,465 yards and 26 touchdowns as a freshman. In 2010, Henry was named a first-team All-Coast at running back after rushing for 2,788 yards and 38 touchdowns while averaging 8.9 yards per attempt.

Moreover, against Arkansas, he had 111 rushing yards on October 19, and his first collegiate rushing touchdown in the 52–0 victory. As well as, against Chattanooga, he had six carries for 66 yards and his second rushing touchdown of the season on November 23. Henry shared time in the backfield in the 2014 season, with T. J. Yeldon.

Henry took over as the starting running back as a junior in 2015 after Yeldon left for the NFL. Furthermore, the Tennessee Titans signed Henry on May 9, 2016, to a four-year, $5.40 million contract with $3.30 million guaranteed and a signing bonus of $2.13 million.

He started his rookie season as the backup running back to veteran DeMarco Murray. At there, he wore the No. 2 jersey throughout training camp. Henry scored his first career touchdown on a 6-yard run in a 36-22 victory on October 27, 2016, over the Jacksonville Jaguars.

Henry ran for a then-career-high 92-yards and a touchdown on 14 carries in a 37–16 victory against the Jacksonville Jaguars on September 17, 2017. He ran for 109 yards on 11 carries and beat his longest rush of the year on December 3, 2017, with a 75-yard rushing touchdown late in the fourth quarter of the 24-13 victory. In the 2018 season, Henry recorded an eight-yard pass completion, during Week 2, the first of his career, to Taiwan Taylor in the Titans’ 20–17 victory over the Houston Texans.

Finally, in 2015, he won Heisman Trophy, as well as the Doak Walker Award, the Maxwell Award, and the Walter Camp Award.

He has not been a part of controversy and rumor as he likes to keep his personal life secret.

He has a high profile of net worth but has been hiding from the media or public.

An American football running back has an average body with brown hair and the black eye.

Kailyn Lowry gets a new dating reality show! Is she pregnant? Is she going to remarry?