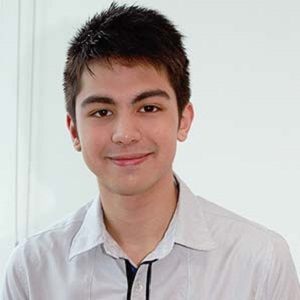 Derrick Monasterio is an unmarried person. Currently, he is in the relationship with Livia Dumont since 2019. In an interview at the Havana Night thanksgiving party, the official told that he is dating her. Livia is a Brazillian model.

Previously, he has been in the relationship with Issa Pressman. They started to date each other in the year 2014.

Derrick also had an affair with Sarah Lahbati in 2011 and with Bea Binene in 2011.

Who is Derrick Monasterio?

Derrick Monasterio is a Filipino actor, singer, and dancer. He is extremely prominent for his role in Superhero, The Road, and Tween Academy.

He was born as Derrick Leander Monasterio to Tina Monasterio and George Crimarco on August 1, 1995, in Quezon City, Philippines.

His nationality is the Philippines and belongs to Asian-Italian ethnicity.

Concerning his educational background, he attended high school at Angelicum College. Later on, he took a legal management course at San Beda College.

As Derrick’s mother is also an actress, he was highly encouraged by her.

He made film debut in the year 2011 and starred as ‘Maximo’ in the film titled “Tween Academy: Class of 2012”. In the same year, he appeared in the other two films titled “The Road” and “My House Husband: Ikaw Na!”

Derrick is also an excellent singer. He has released many albums. His first track for Sinner or Saint TV show came out in 2011.

Then in 2012, he recorded for One Love, One Heart, One Nation, and The Witness. His single Kailangan Kita was released in 2015.

In 2016, Derrick’s two albums One Heart and Derrick Monasterio were published.

He was nominated for Best Male New TV Personality, Breakthrough Performance by an Actor, and New Male Recording Artist of the Year in 2011 and 2012 respectively.

Currently, there are no drastic rumors regarding Derrick’s personal and professional life. It seems like he is doing the best job without harming others for which he hasn’t been a part of desperate controversy yet.

Derrick Monasterio has an average height of 5 feet 10 inches and a weight of 74 kg. He has black eyes and black hair.

Derrick Monasterio has followers of around 898k and has posted for over 1.23k posts on Instagram. His Twitter account is followed by more than 44.6k followers.