Who is Dervla Kirwan married to?

Dervla Kirwan is in a happily married relationship with her husband Ruper Penry-Jones. After a four-year engagement, the couple officially got married in 2007. They are blessed with two adorable kids, Florence and Peter.

The couple met each other for the first time during the work of Dangerous Corner at West Yorkshire Playhouse, located in Leeds.

They went on to work together in Les Liaisons Dangereuses in 2003 and the tv series, Casanova in 2005.

Previously, she was engaged to Stephen Tompkinson, her Ballykissangel co-star from in 1998. They decided to separate after two years. 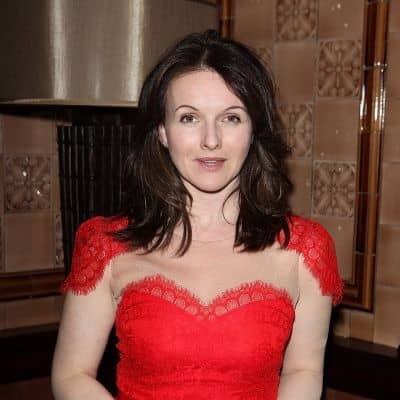 Who is Dervla Kirwan?

Deervla Kirwan is a beautiful Irish stage, television, and movie actress. She is best known for appearing in Ballykissangel, Goodnight Sweetheart, and The Next Door.

She also worked on movies like, With or Without You by Michael Winterbottom, Luna by Dave McKean, and Interlude in Prague.

Deervla Kirwan was born to her parents in Churchtown, Dublin, Ireland on 24 October 1971. Kirwan is 51 years old as of 2022 and holds an American nationality. She is of mixed ethnicity while Scorpio is her birth zodiac sign.

Peter Kirwan was her father, an insurance broker whereas Maureen O’Driscoll is her mother, a language instructor especially French and English. She has two elder sisters than her.

She went to Loreto Beaufort, a Catholic school for girls, located in Rathfarnham, Dublin. Later, she left the school to further pursue her acting career.

She finished her secondary school at the now-defunct non-denominational Sandymount High School located in Dublin.

Based on Maeve Binchy’s novel Dervla Kirwan debuted on the TV series, The Lilac Bus in 1990 along with Stephanie Beacham and drama series, Troubles in 1988.

In 1991 her appearance as Bernadette Kennedy in BBC Scotland production’s A Time To Dance became her major breakthrough in her career that brought her a lot of fame and recognition.

She landed in Casualty and in the Good Sweetheart starring alongside, Nicholas Lyndhurst.

She briefly appeared as Assumpta Fitzgerald, in Ballykissangle between 1996-1998 which has 23 episodes. Again, she repeated this role in a British sitcom titled, The Vicar of Dibley and especially for a Father Ted.

Likewise, she booked her role as a single mother of two daughters in BBC production’s TV Christmas movie titled, The Greatest Store in the World in 1999.

She was cast as Emma Rose in opposite to Amanda Holden, Hugo Speer, Damian Lewis, and Sarah Parish in a BBC tv series, Hearts, and Bones.

The show came up with two seasons. She starred as a former IRA bomb-maker in the Sky TV drama series, The Bombmaker.

She also starred alongside Don Gilet in the crime series, 55 Degrees North. The show was launched in 2004. She was able to book a role even for a second season in 2005. The series aired in the US with the name, The Night Detective. She worked in the BBC drama series, True Dare Kiss in 2007.

Kirwa made a guest appearance as pathologist Amanda Long in the BBC TV series, Silent Witness in 2019. In 2020, she started to appear on the Irish TV series, Smother that airs on RTE Television.

The show was released on March 2021 delay caused due to COVID-19 restrictions in Ireland. Later, in autumn 2021, the show was broadcasted on UK’s Alibi in autumn of 2021.

The net worth of actress, Dervla Kirwan is estimated to be around 7 Million USD while her salary and income are not disclosed yet.

Dervla Kirwan has not been involved in any rumors and controversies up to date as she maintained a clean figure.

As per the sources, Dervla Kirwan is 5 feet 4 inches tall and weighs around 58 Kg.

She has a fair complexion, brown colored hair, and a couple of hazel eyes.

Dervla Kirwan is active on Twitter having around 3.3K followers. There is an official Facebook page under her name, which is enriched with a number of followers as well.

Kirwan does not seem to be active on Instagram.