DeSean William Jackson is in a relationship with Kayla Phillips. Kayla is the hot WAGs of wide receiver for the Tampa Buccaneers.

The two first met each other in the year 2015. Since then they are together. On 26th October 2015, they welcomed their first son DeSean Jackson Jr.

After that, in June 2018, they announced that they were expecting a second child together. And at the end of the year, they had a baby boy. 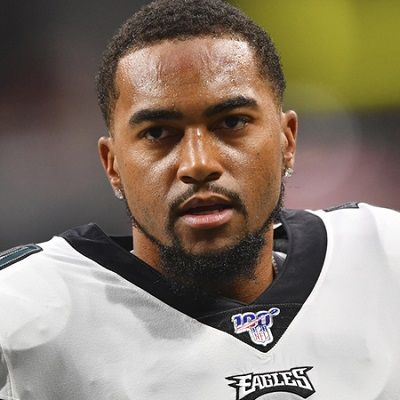 I think I'm a playmaker and the last three games weren't my time to make plays.

It's way early, but that's definitely our goal. We think we can compete at the highest level next year. We know we're good enough to do that.

Who is DeSean William Jackson?

DeSean William Jackson is an American Football wide receiver known for being the player of the National Football League.

Similarly, he was drafted by the Philadelphia Eagles in the second round of the 2008 NFL Draft.

DeSean William Jackson was born on 1st December 1986 in Los Angeles, California. He is the son of father Bill Jackson and mother Gayle Jackson.

His father Bill was hospitalized with pancreatic cancer during the Eagles run in the 2009 playoffs. He died on 14th May 2009.

DeSean grew up in the Crenshaw neighborhood of Los Angeles.

After that, he attended the University of California in Berkeley.

DeSean was part of the California Golden Bears football team from 2005 to 2007. He was also expected to play for Cal’s baseball team but, due to the success of his freshman football season.

He entered his junior season being considered a Heisman Trophy candidate. Similarly, he finished the 2007 season with 65 catches for 762 yards and scored six touchdowns as a receiver.

Likewise, DeSean finished with 52 career plays of 20 yards or more making up 23 percent of his 226 touches.

DeSean was drafted by the Philadelphia Eagles in the second round of the 2008 NFL Draft. Similarly, he has also played for the Washington Redskins and Tampa Bay Buccaneers.

Philadelphia Eagles faced a bad attitude, an inconsistent work ethic, missed meeting and lack of chemistry with head coach Chip Kelly. He was associated with reputed Los Angeles street gang members who have been connected to two homicides since 2010.

DeSean has black hair and eyes. He is 5 feet 10 inches tall and weighs around 79 kg.