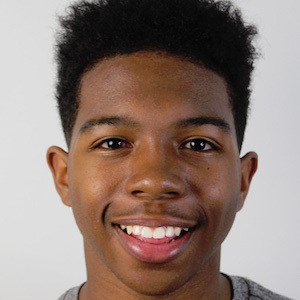 Deshae Frost is in a relationship with his crush, Kellie. She is a popular YouTuber who has got her own channel named KellieSweet. She has got more than 2 million subscribers on her YouTube channel.

The famous stand-up comedian made a surprise trip of Hawaii with his crush and posted the video of their trip on his channel on February 9, 2019.

The couple seems to be spending their quality time with each other.

Who is Deshae Frost?

Deshae Frost is an American stand up comedian, actor, and social media personality who gained a lot of fame from his funny comedy videos.

He has made his videos collaborating with stars like Kingbach, Jay Versace, and many more. He has more than 90k subscribers on his YouTube channel.

He was born on January 9, 2001, in Seattle, Washington, USA. Frost has not disclosed information regarding his father and siblings but he includes his parents and other relatives in his videos.

Frost holds American citizenship and his ethnicity is African-American.

Talking about education history, he has not provided information however, it is under review.

Deshae Frost made his decision to make his career in the entertainment industry from the age of 8. He began his career with music and started to rap by the name of D-Frost. His talent was recognized by his mother and he got full support from her.

After he got support from the whole family, he began to do stand up comedy and started to perform professionally. He gained much fame and started to produce his own Vines and uploaded them on social sites, which got positive responses from the viewers. He made his collaboration with stars like Tony Roberts, Faizon Love, Tiffany Haddish, and many more.

After being successful in stand up comedy, he created his own YouTube channel on April 23, 2011, under the name ‘Deshae Frost’. He included Q&A videos, pranks reactions, challenges, etc. in his videos which are viewed and liked by thousands of people.

Frost also made his appearances in shows like ‘Castor Oil’, ‘Black Jesus, ‘Sketch House Show’, ‘Chiefs’, ‘S.W.A.T.’, and many more.

The famous social media celebrity has not been awarded and nominated for his work to date. Hope, he will in the future for his talent.

He has an estimated net worth of around $1 million and he has earned that sum of money from his different professions. Also, he earns about $2.7k to $3.8k from his YouTube channel.

He was at the Westfield Southcenter Mall in March 2019 and suddenly a large crowd of fans ran through the mall with some shouting about a potential active shooter and during that incident, one woman had a severe panic attack.

Then, he left the mall immediately and the police are still investigating the scene.

Deshae Frost has a height of 5 ft. 4 inches and he weighs 65 kg. Also, he has got black hair and dark brown eyes.

YouTuber Deshae Frost may face criminal charges for the stampede in Southcenter Mall after his meet and greet there!

Supernanny Jo Frost: How she handles children? Know also about her nut and other allergies and how she takes care of herself!