Deshauna Barber is single and self-partnered. 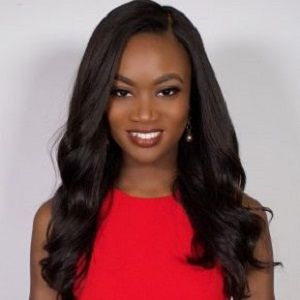 As a woman in the United States Army, I think it was an amazing job by our government to allow women to integrate into every branch of the military. We are just as tough as men. As a commander of my unit, I’m powerful, I am dedicated, and it is important that we recognize that gender does not limit us in the United States Army:I think I would make an awesome actress," Barber said. "Now that I really sit back and think, I just know that I'm not meant to be in a cubicle." If she could act in anything right now, it would be on her favorite show, Game of Thrones. "I want to be in a different world:There have been so many situations where people look at you as a woman more than anything and just believe that you're weak," she said. "I did run into some situations where people would say, 'Oh, she's so small, she's not gonna be able to carry this weapon. She's not gonna be able to do all these things because not only is she a woman, she's a pretty woman, and she seems as though she isn't ready to get down and dirty like the rest of us.' It's important for us as women to make sure that when we're in the room with men, that we stand our own. I always say that just because we're allowing women to integrate into these branches, that does not mean that you lower the standards for the woman. It just means you're allowing her the opportunity to prove that she can handle the position. Everyone should be able to be given the opportunity to meet a standard that will allow them to enter into whatever position in the military is possible.

Who is Deshauna Barber?

In addition, she is a motivational speaker and the captain of the United States Army Reserve.

Deshauna Barber was born on 6 December 1989, in Columbus, Georgia, USA. Her nationality is American and she is of African-American ethnicity.

She is the daughter of Darrell Barber and Cordelia Barber. Both of her parents are military veterans.


She completed her school education in her native place. After that, she attended Virginia State University and graduated with a degree in business management.

After that, she enrolled at the University of Maryland University College. From there, she graduated with a master’s degree in management information systems and services.

Barber joined the United States Army at the age of 17. In the US army, she is a quartermaster officer and logistics commander in the Army Reserve.

After winning Miss USA 2016, she represented the USA at Miss Universe 2016 in Manila. She finished 9th at the 65th Miss Universe. Barber has had a successful career as a beauty pageant. In addition, she has made a big name in the military field.

She is also a captain and also serves as an IT analyst for the United States Department of Commerce. Barber became popular when she won the Miss Virginia International 2011 title.

After winning the Miss USA 2016, Deshauna faced some racist backlash. Many people objected and expressed their dissatisfaction with her win because of her skin color.