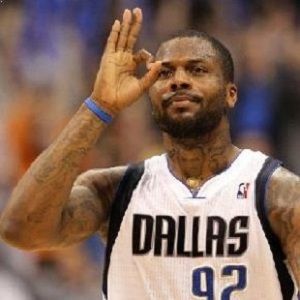 We've got next year to look forward to. We've got a good ball club, and we've seen the whole demeanor of things change

You can't say too much about Grant. He does everything. Guards, defends, and gets into the penalty. I think he played awesome tonight and he's our leader. We've got to feed off him

You get into a city at 3 or 4 o'clock in the morning off a back-to-back, you don't want to have put all of that stuff on. I just think it's a little too excessive.

What is the relationship of DeShawn Stevenson?

Reflecting on a personal life of DeShawn Stevenson, he is a married man. He is married to his girlfriend, Brandi. He has three children and her wife Brani is pregnant and soon-to-be-mother.

Who is DeShawn Stevenson?

DeShawn Stevenson has played for different teams in National Basketball Association (NBA). He is best known for his defense and his athleticism.

Former professional American basketball player DeShawn Stevenson was born in Fresno, California on 3 April 1981. Stevenson is of African American ethnicity and has an American nationality.

He is the son of Darryl Stevenson but his father never married his mother. Darryl had murdered his own mother and eventually, he also died at the age of 36 due to lung cancer in Corcoran State Prison in the year 1999.

As his parents were not there, he lived with his godfather, in Easton, California.

He studied at Washington Union High School in Easton, California, and was named on McDonald’s All-American team.

He became the youngest player to play the Jazz and finished second in NBA Slam Dunk Contest during the 2000-01 season.

On 19 February 2004, he joined Orlando Magic and after playing around two years for the Magic he opted out of his contract.

On 5 August 2006, he signed a two-year contract with Washington Wizards where he played under coach Eddie Jordan.

On 16 July 2007, he resigned a four-year contract extension worth $15 million to the Wizards. On 13 February 2010, he was traded to Dallas Mavericks and played for the team wearing jersey number 92.

He won the 2011 NBA Championship playing for the team Mavericks after winning over Miami Heat.

On 23 December 2011, Stevenson signed a one-year contract worth $2.5 million with New Jersey Nets.

On 11 July 2012, he was traded to Atlanta Hawks but released from the team on 2 August 2013. On 19 December 2016, he formally retired from playing basketball professionally.

DeShawn Stevenson: Salary and Net Worth

His success in his career path has paid him well financially making his net worth estimated to be $10 million as of 2022.

Unlike other players, he hasn’t been in rumors but he suffered a controversy when he was arrested for public intoxication in Irving, Texas.


DeShawn has a height of 6 feet 5 inches.

His body weighs 99kg. He has black hair and dark brown eyes.