Desi Banks is an internet sensation, an actor who was on 'Little', 'Love By Chance', etc.

Desi Banks seems to be in a romantic relationship with his fiance. However, the identity of his fiance has not yet been revealed. They’re not married yet. The couple has a son together. Desi also posted a picture of his small family on his social media platforms.

The couple seems to be very in love with each other. As for his past relationships, he has not yet publicized his ex-lovers. 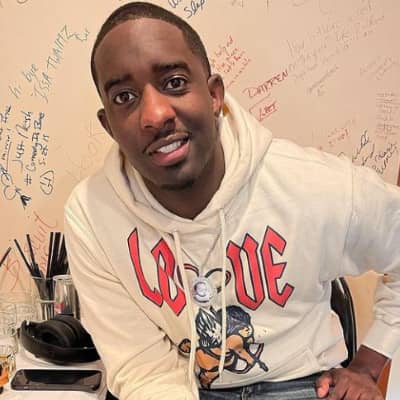 Who is Desi Banks?

Desi Banks is an American Social media sensation. He is an actor, comedian, and digital genius who is well known for his YouTube channel, stand-up comedies, and a few roles in movies like ‘Little’, ‘Love By Chance’, etc.

Desi Banks, actual name Desi Terrell Banks, Jr, was born on 9 May 1993. He was raised in Atlanta, Georgia, USA, so he holds an American nationality. Presently, he is 28 years old and falls under the zodiac sign Taurus. Further, he belongs to the African-American ethnicity.

The information and name of his parents are not given at the moment. But, he has a good relationship with his parents, hence he has posted photos with his mother and grandmother on Instagram. Other details on his relative, cousins, siblings, etc are not known as of yet.

Regarding his educational journey, he graduated from Georgia State University with a bachelor’s degree in Sociology. However, the name and information on the school and he attended are not available yet.

Desi Banks is a famous social media personality well known as an actor too. He was inspired to pursue a full-time acting career through his life’s experiences attached to his maternal figures. He utilizes knowledge learned while on the football field in his life while acquiring his purpose. His purpose in the acting industry has connected him with many passionate fans and brands all over the world.

Desi has done standup comedy ‘You’re My Boyfriend Tour’ in over 30 cities with B.Simone. His tour revealed his adaptability, talent, and skills to the audience. His social influences got him partnerships with many companies such as Google Pixel.

Desi Banks began his Youtube career on 15 December 2014. Till now, he has gathered over 1.50m subscribers along with 384,825,908 views. He mostly posts content related to comedy, vlogs, and relatable videos. However, he posted his first video on 17 March 2015 under the title “Lil Johnny at his auntie/babysitter house. FT:@Bdotadot5” and has got 926k views till now.

He also has a collaboration Youtube channel named ‘The B.Simone and Desi Show’ with B.Simone but it has not been active for almost over a year. However, we can see their collabs on his Youtube and Instagram. Similarly, the duo has appeared in the show ‘And Then We Had Sex’.

He has also played in many movies as well. His first main role was in the short film ‘Flexin’ and that led him to be cast in the movie ‘Love By Chance’. As of 2019, he scored a role in the Will Packard Production film, ‘Little’ in which Issa Rae and Regina Hall are starring. Desi’s passion for acting opened many opportunities to audition for lead cast in films.

A list of films he has played on is given:

As of 2021, he has decided to set off on an “In Real Life Comedy Tour”. The tour is said to take place on June 11 and go on till July 31, 2021. He is visiting places like Mississippi, Greensboro, Baton Rouge, and Atlanta.

He has been cast as the main lead named Zay in the upcoming movie ‘Haunted Trail’ alongside Brook Sill and Marquise C. Brown. The movie is directed by Robin Givens. It is about a bunch of college friends receiving a surprise of their lives when they find out there is an actual killer in the scene of a local haunted trail.

Desi Banks has been nominated once in the year 2021. He is nominated for ‘Outstanding Social Media Personality’. Before this, he had not received any awards or nominations. It seems he is coming to fame now.

Desi Banks earns a pretty decent amount of money considering his profession. He has a net worth estimation of approximately $1.4 million. His primary source of earnings is his social media fame, acting career, and also his stand-up comedy tours. Furthermore, he has partnerships with many companies like Google Pixels.

Desi Banks is famously known for his hood comedy videos and a couple of videos featuring B. Simone. In 2020, his Twitter got canceled by fans after he called out the difference between a protest with a photo of Martin Luther King Jr. and others marching against a photo of people looting at a Target.

The year 2020 was a mess with the wake of BLM and the murder of George Floyd, most social media along with Twitter wasn’t agreeing on what he had put out. It affected him to the point where he lost 500k followers.

Soon he tweeted an apology for offending the audience with his dark sarcasm. His tweet went as:

“At the end of the day bra, I want to see change as well, man. If I offended you, I apologize. Emotions are at is highest right now. I was just trying to bring light. Tweets can be [interpretated] in the wrong way sometimes.”

Similarly, B.Simone was also going through a similar problem about how she thought rioting was the positive way to handle anger on George Floyd’s death. However, it backfired and people got offended and pointed out the hypocrisy of Simone’s thoughts on the rioting against the actions of Jesus Christ.

Further, she too posted an apology for offending many users and clarifying her tweet as

“What we do with that anger is what makes the difference. I don’t want you to think I’m not gonna be on the front line and I’m just gonna sit in the house and pray all day! We need both!”

It seems people were so furious over George Floyd’s death that they turned a blind eye to any other different opinions.

Desi Banks stands tall at the height of 66 inches (5 feet 6 inches) and weighs around 73 kg. Other body measurements like chest, waist, hips, shoe, biceps, etc are not given at the moment. However, he has a cheerful and funny personality with healthy body physiques. Similarly, he has a pair of dark brown eyes and black hair.

Desi Banks is active on all social media. He goes by the name ‘@iamdesibanks‘ on Instagram and has more than 6.5 million followers. As for Twitter, he is active under the name ‘@iamdesibanks‘ with 620k followers. He also has a Youtube Channel ‘Desi Banks‘ and has gained 1.50 million subscribers. He has more than 1.2 million fans on his Tiktok account ‘@1iamdesibanks‘. He is also available on Facebook as ‘Desi Banks’. Moreover, he has provided his email ‘[email protected]’ for booking/press purposes.