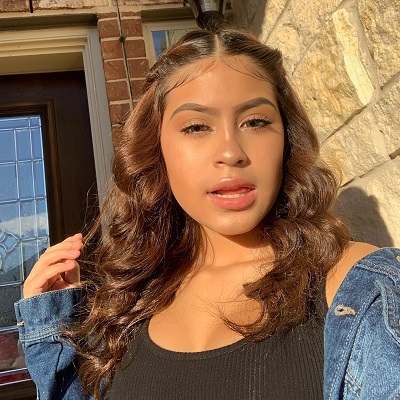 Desiree Montoya is in the relationship with Baby Diego. Diego is also a social media personality.

The love bird started dating in 2018. They frequently share their photos with their fans and followers.

Her Instagram posts suggest that she loves getting clicked perfectly.

Who is Desiree Montoya?

American Desiree Montoya is an Instagram star and TikTok star. Montaya is renowned for her lipsyncs videos on TikTok.

She is also a brand ambassador of the Fashion Nova.

Desiree Montoya was born on the 23rd of February 2005 in Texas. She is of Spanish ancestry.

She has two siblings.

She is active on TikTok with the handle, @dxddy._.desi.

Initially, she started her career as a TikTok. The contents for her TikTok videos are R&B and hip hop music and lip-syncs videos.

Her videos went viral after her TikTok lip sync video, I Know. After that, her TikTok contents gripped the attention of many people which made her a TikTok star.

Currently, she has 1 million followers on the account with 117.4 likes.

After that, she started to post photos that reflect her fashion sense and personality. Such posts won the hearts of many and made her an Instagram star.

Apart from the TikTok and YouTube, she is also a YouTuber. She creates content for the channel with her boyfriend. The channel was created on the 22nd of July 2018. Her very first video earned 442k views.

She has an estimated net worth of $700k. Her earnings as an Instagram start is in the range of the 5 digits number.

As a TikTok star, her estimated earnings per post in TikTok is $132. Her earnings as a brand ambassador of the  FashionNova is in the range of $22k to $66k.

She is a brown-eyed brunette. Her height is 5 feet and 5 inches.

There TikTok star has not been in any sort of controversy that created a buzz on the media.

She also has a joined YouTube channel with her boyfriend, Baby Diego with 74.2k subscribers and 442k views.