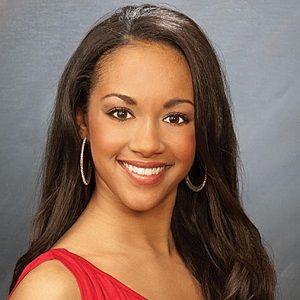 Desiree Wiley is married to David Fluellen. David is an American footballer who plays for Tennessee Titans of the National Football League. So far, the couple has not invited any child but might plan it in the near future.

So far, the couple is living a peaceful and secretive marriage life. Desiree is not open about her married life and seems like she is not interested in sharing that information.

And as of now, there are no any rumors about her affairs.

Who is Desiree Wiley?

Desiree Wiley is an American news reporter and anchor. Currently, she is working for NECN and NBC Boston.

Desiree Wiley was born in Lockport, New York. Her father Jon Wiley works in a substance abuse program and her mother Dianne Wiley is a nurse. In addition, her siblings are Deanna Wiley and Dakota Wiley.

She was very creative during her childhood. She learned swimming, dance, jazz, and also has participated in several recitals during her school life. Not only she participated in these activities, but she was also very good at it.

Desiree completed her high school course from Lockport High School. Furthermore, she attended Buffalo State College from where she receives a Bachelor’s degree in journalism.

Desiree Wiley’s childhood passion and interest led her to some success at an early age. Starting at the age of 9 she has taken part in several beauty pageants and has done a fair bit of modeling.

She has been able to receive various titles including, 2009 World’s Universal Girl in Orlando, and 2000 Child Model of the Year. In addition, she also competed for Miss New York and Miss America pageant.

Also, she is a contributing author of The World of Economics.

So far, there are not any awards under her name for her professional work. However, at an early age, she was able to grasp many beauty pageant titles including, 2009 World’s Universal Girl in Orlando, 2000 Child Model of the Year, and several others.

Desiree Wiley: Salary and Net Worth

As regards Desiree’s salary and net worth, we are not known to those details yet. However, she has an annual salary of $25000-35000.

And, it seems like she has just started to progress her professional career and it might be very early to look into her wealth.

Prior to joining NBC Boston, there was a rumor about the possibility of her joining the very broadcast company. Later, the rumors were proven true as she officially informed her new job in NBC Boston to the public.

However, there are no rumors about her affairs and personal life so far.

Desire Wiley is a gorgeous and attractive lady with brown hair. Furthermore, her eyes color is honey.

However, many of the trusted domains are not familiar with the details regarding her body measurements. In addition, her weight and height are of average size.