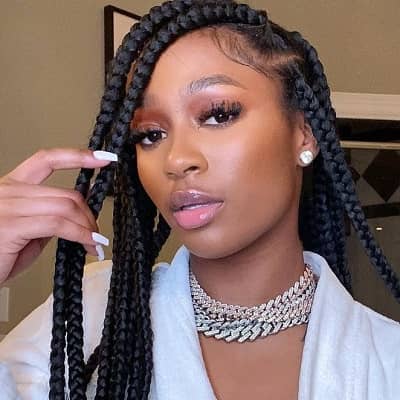 Dess Dior is currently taken. She is in a relationship with rapper Future.

The pair started dating each other in 2017 and in 2019 it was rumored that the lovebird was breaking off.

However, it was only a rumored the couple are still in the relationship as of now. The couple also frequently appear on each other’s Instagram respectively.

Recently, the pair together celebrated Future’s mother’s birthday on February 2, 2021, with an intimate get-together.

Moreover, no information available regarding her past relationship or boyfriend.

Who is Dess Dior?

Dess Dior is an American Hip-Hop recording artist and Rapper. She gets recognized for her songs such as “Stop Playin” and “Bandz”.

Dess was born on November 2, 1998, in St.Louis, Missouri, and raised in Savannah, Georgis, United States. She holds an American nationality and belongs of African-American descent. Her real name is Destiny Bailey.

The identity of her family including her father, mother, and siblings hasn’t disclosed yet. Nevertheless, she has mentioned her mother on her social media sites. Also, no details available regarding her academic history.

Dess has built a fortune for herself with a rap career. She started her raping career at the age of 12 in a teen rap group.

Later, she moved away from her group members and relocated to Atlanta, GA to pursue her career as an artist.

In 2018, she began her self-titled Youtube channel and started gaining traction. Similarly, she released her first Expanded playlist in June 2020 titled “Definition of Dess”.

From her first debut EP, she got very positive responses and reviews. In the same month, she released her single, ‘Talk To me’ on her Youtube channel which is one of the famous songs of her. The song has gained more than 18k likes to date on youtube.

Also, Dess established her own entertainment company show Luv Entertainment Company. She has even performed at Rolling Loud, a massive platform for the newcomer.

To date, she hasn’t involved in any sorts of controversial acts such create a huge buzz in the media.

As of 2020, Dess has an accumulated net worth of $5 million throughout her profession as a musical artist.

The rapper stands at the height of 5 feet 7 inches tall and her weight is around 60 kg. Likely, she has a black hair color and as well a black pair of eyes.

Dess has a verified Instagram account with the handle @1dessdior where she has over 1.2m followers. Also, she has a youtube channel with more than 71.2k subscribers.

On the channel, she uploads her official song videos, audios, vlogs, and so on.

Furthermore, she has a Tiktok account with more than 108.6k followers. She is also active on Twitter and amassed 351.4k followers.

Also, she is active on Facebook where more than 7k people follow her with over 6k likes.