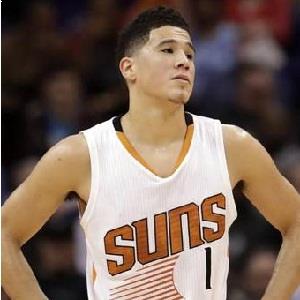 Just because you miss shots, you can't doubt yourself. It's easier said than done

It was a culture shock at first, moving from Michigan to Mississippi. But it ended up being the best decision I ever made

For me, when I was in high school, that was my ultimate dream, was to make it to the NBA.

What is the relationship of Devin Booker?

Reflecting on the personal life of Devin Booker, he appears to be single at the moment.

He previously dated a supermodel, Kendal Jenner. The couple began a relationship in 2020. Similarly, they made their relationship official on Valentine’s Day 2021 by posting the story on IG. Kendall shared a photo of them where they are lying and happy in their own world.

However, after nearly two years of dating, the beautiful couple amicably called it quits. Although they broke up, their friendship still remains as strong as ever.

Also, the stars’ fans were hoping for them to get back together in the future.

Who is Devin Booker?

He plays for the Phoenix Suns of the National Basketball Association (NBA). He plays the shooting guard position wearing jersey number 1.

Devin Booker was born in Grand Rapids, Michigan. He was born on 30 October 1996. Booker has an American nationality and he is of African- American and Spanish ethnicity.

His birth name is Devin Armani Booker. He is the son of Veronica Gutierrez(mother) and Melvin Booker(father). His father is also a basketball player and his mother met his father at the Continental Basketball Association’s Grand Rapids Hoops. He has a sister named Mya Powell.

He studied at Moss Point High School in Moss Point, Mississippi where his father was hired as an assistant coach.

For his further study, he attended the University of Kentucky and played college basketball.

Devin Booker started playing basketball professionally in 2015 and he is still active in it.

He started playing basketball professionally after being selected by Phoenix Suns in the 2015 NBA draft.

On 13 July 2015, he signed a rookie contract with the Suns and began his journey towards his career path.

On 3 March 2016, he recorded his career-high of 34 points in a match against Miami Heat becoming the first rookie to record 30+ since Richard Dumas in the 1992-93 season.

In 2017, he became the youngest player to score 70 points in NBA games. He is still active in the NBA playing for team Phoenix Suns.

Unlike other players, he hasn’t been in any rumors and suffered controversy in his life.

Devin Booker has a height of 6 feet 6 inches. He has black hair and black eyes. Furthermore, his body weighs 95kg.