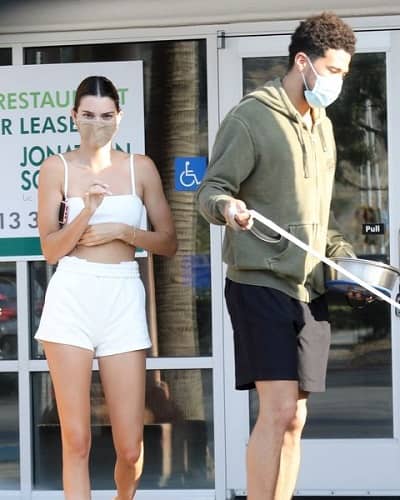 On 22nd August Kendall Jenner and NBA player Devin Booker were seen grabbing dinner at Noby restaurant. The two pair was joined by Kylie Jenner in the Malibu, California. Kendall rocked a cream-colored slip dress which she paired with an off-white cardigan, nude mules, and a baguette bag.

Kendall Jenner and Devin Booker have been spending a lot of time together. They were first seen together on a road trip from Los Angeles to Arizona in April. Likewise, they are giving some relationship hints after spending time together at the beach in Malibu. They were enjoying time with each other, cuddling in the sand and some PDA. Similarly, Kendall wore a pink-and-white bikini and a black cap.

After that, they were seen together with their quarantine buddies. As per sources,

“Kendall and friends have a small social circle amongst the group, who have been following the same social distancing and physical distancing guidelines. Devin is a friend and is part of the small group. They took a road trip for some much-needed air.”

The two have been sending some flirty comments on each other back and forth. When Jenner posted a boomerang of herself with a strawberry emoji, Devin commented,

Previous relationships of Jenner and Booker

Back in 2018, Kendall Jenner dated basketball player Ben Simmons. They had an on-and-off relationship and he was the only one she confirmed dating. Their relationship was till May 2019 after which they broke up. Their relationship fell apart due to their busy schedules. Even after their break-up, they were spotted hanging out together. Also, seen together at the 2020 Super Bowl.

Devin was dating Jordyn Woods, an ex-best friend of Kylie Jenner. They had gone on a double date with Kendall and Ben.

How much is the net worth of Kendall Jenner?

Recently in the last of July 2020, she gave a tour of her $8.5 million mansions. She chose Tommy Clements, Kathleen Clements, and Waldo Fernandez to design the interior of the mansion. It includes an art studio, a fitting room, and an art collection.

Tall and handsome Devin Booker is a well-known American Professional basketball player. He is best known as the player for Phoenix Suns of the National Basketball Association (NBA). He plays the shooting guard position wearing a jersey number 1. Read more bio…

Kendall Jenner is an American fashion model and television personality. She is famous as a model of Sherri Hill dress line, dressing for proms and pageants. She is the stepsister of the reality TV star Kim Kardashian. Read more bio…

Romain Bonnet was married to Mary Fitzgerald before the show ‘Selling Sunset’! 6 interesting facts on Romain
Tags : Keeping Up with the Kardashian Model