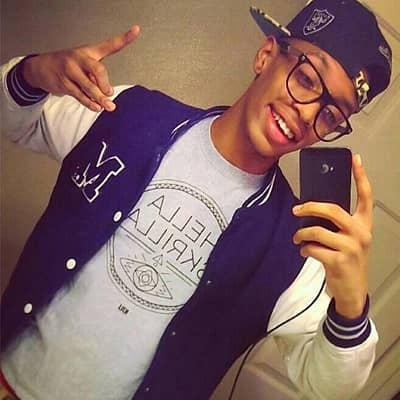 Devion is quite secretive when it comes to his personal life. He has not seen involved with anyone on a romantic level.

The celebrity kid is now living his single life.

Who is Devion Cromwell?

Devion Cromwell is an American media personality and a celebrity kid.

He is well known for being the son of Melissa Brim and also the adopted son of Floyd Mayweather.

The celebrity kid was born in 1996 in the United States. The exact birth date of Devion is untold.

His mother Melissa Brim is a businesswoman. Floyd and Melissa were in a relationship and so Devion was raised along with Floyd Mayweather. Floyd is a popular American professional boxer and promoter.

Many websites and people say that Devion is referred to as Floyd’s ‘adopted’ son because Floyd grew him, but never formally adopted him.

Devion has four siblings. Zion Shamaree Mayweather, Koraunh Mayweather, and Jirah Mayweather are his step-siblings. Likely, he has a biological sister is Iyanna Mayweather.

Hee holds American citizenship and belongs to is of Caucasian ethnic group.

Devion hasn’t clarified his professional career. However, he has written as an entrepreneur in his Instagram bio.

The celebrity kids came into the limelight being the son of businesswoman Melissa Brim and boxing legend Floyd Mayweather.

The exact earning and net worth of Devion are unknown. However, he lives a luxurious life.

Talking about his father, Floyd has a net worth of around $450 million as of 2021. Similarly, his earnings from his boxing career are more than $1.1 billion.

An incident happened on Halloween 2014 which was all in the media and highlight Devion and Floyd’s relation in the media.

Floyd unexpectedly arrived at Melissa’s home. He found Devion with some friends. There Floyd commanded everybody to leave the building and it went out of the hand.

Devion furiously called Floyd, not his birth father. This angered Floyd, and then he grabbed Devon’s neck and choked him.

His friends even called spoke to the police after the incident. However, Devion didn’t pursue the matter. It was because of Floyd’s relationship with his mother.

Devion stands tall with a height of 6 feet. His weight is unknown.

Talking about his appearance, he has short black hair with black eyes.