Devon Franklin is single presently. He was married to an actress Meagan Good. As of now, they are splitting.

After nine years of marriage, the couple decided to part ways. On December 20, 2021, Franklin filed for divorce at the Stanley Mosk Courthouse in Los Angeles.

The pair met for the first time on the set of Jumping The Broom in the year 2011.

Shortly after, they fall for each other and tied the wedding knot on the 16th of June 2012 in Malibu, California.

They also worked together on a book titled “The Wait”, published in the year 2015. Further, they didn’t have any kids from their relationship. 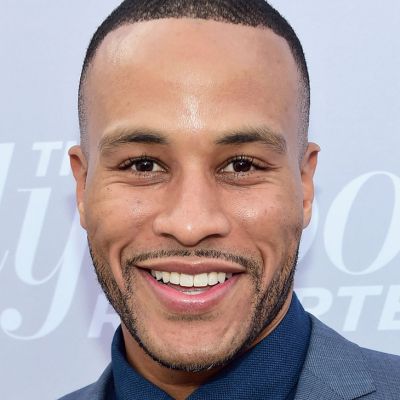 The Bible has stood the test of time. Why? Because the stories are good.

Who is Devon Franklin?

Devon Franklin is recognized as a producer, author, and motivational speaker. He is popular for the films Miracles from Heaven and Heaven Is for Real. Franklin is the author of the New York Times best-seller book The Wait, which he co-wrote with his wife Meagan Good.

He is the CEO and president of Franklin Entertainment, a dynamic multi-media entertainment company that produces inspirational and commercial content.

Devon was born on the 13th of April 1973 in Oakland, California, U.S. According to his birth date, he is 43 years old. His Zodiac sign is Aries.

Franklin is the son of Donald Ray Franklin (father) and Paulette Franklin (mother). He has two brothers named Donald Ray and David Brandon. At the age of 36, Franklin’s father passed away due to a heart attack.

Devon earned a bachelor’s degree in Business Administration from the University of Southern California with a minor in Cinema-Television in 2000.

During his year, Devon started his career in the entertainment industry as an intern at Overbrook Entertainment. He worked under Will Smith and James Lassiter.

After graduation, Franklin began working for the full-time position at Overbook. Following this, he was recruited by Tracey Edmond’s company Edmonds Entertainment in a junior executive post.

In 2003, Devon joined Metro-Goldwyn-Mayer as a creative executive. He was later recruited as the director of development at Columbia Pictures after Sony bought MGM in 2005. He worked on acclaimed projects under Columbia Pictures such as The Pursuit of Happyness, Hancock, and Seven Pounds.

Similarly, Franklin also produced numerous films like The Karate Kid, Jumping the Broom, Pink Panther 2, Not Easily Broken, The Ugly Truth, and more. In 2014, he launched his own company Franklin Entertainment and produced further projects like Miracles from Heaven (2016), The Star, and Breakthrough. He also made frequent appearances on TV shows such as Dr Phil, The Dr OZ Show, Oprah’s Super Soul Sunday, CBS This Morning, and Entertainment Tonight.

Aside from the entertainment industry, he is also an author. He wrote two best-selling books, Produced By Faith and New York Times best-seller The Wait and The Hollywood Commandments: A Spiritual Guide to Secular Success.

In 2019, he released another book titled The Truth About Men: What Men and Women Need to Know. Furthermore, he has also established a successful career in preaching and motivational speaking.

Devon has earned considerable money from his successful profession as a producer. As of 2021, he has an estimated net worth of around $10 million.

His film, Heaven is for Real was a box office success, grossing $101 million against a $12 million budget. The film becomes the second-highest-grossing Christian film of all time.

Talking about Devon’s physical appearance, he has an athletic body physique with a towering height. He stands at the height of 6 feet tall and his weight is about 75 kg.

Likewise, he has a black pair of eyes and black hair color.

He has also a self-titled YouTube channel with over 18.6k subscribers.