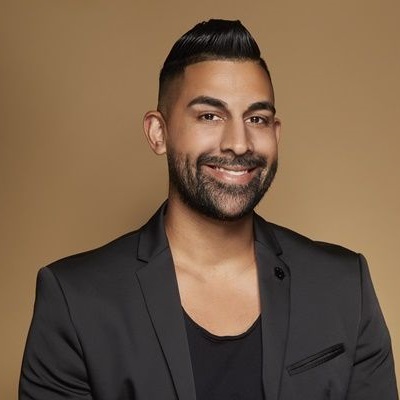 Dhar Mann is engaged to Laura H. She is a beauty influencer and successful businesswoman with two million social media followers. He proposed Laura in Paris, France.

The two met each other when he was beginning his company LiveGlam. Laura was the model for bridal makeup class. They celebrated the success of the makeup class and went out for drinks.

He was on a white button-up shirt and Laura was in a wedding dress. People thought that they just got married. They started working together and Dhar loved the work of Laura.

Similarly, they love traveling together.

Who is Dhar Mann?

He is a reader and enthusiastic world traveler and a devoted success coach.

Dharminder Mann was born on 29th May 1984 in California, USA. He is the son of Baljit Singh and Surinder Singh. His father is the Oakland, California entrepreneur.

Mann studied political science and economics at the University of California in 2007.

Similarly, in the year 2008, Dhar started a luxury transportation company and in 2009 he expanded his fleet to include exotic vehicles. In the year 2010, he founded WeGrow. It is a first-of-its-kind specialty franchise selling hydroponic supplies, especially for growing medical marijuana.

He was featured in national media including CNN, Time, National Geographic, Wall Street Journal, PBS and others. In the year 2015, he founded another company LiveGlam. It is a subscription makeup club that sends members a new company to over one million social media followers and 8-figures in revenue.

In 2014, he was sentenced to five years probation for pocketing city grant money meant for building improvements. He had to repay the city of Oakland $44,399 under the plea deal in which he pleaded no contest to five felony counts of defrauding the city.

Mann has black hair and brown eyes. He is 5 feet 10 inches tall and has decent weight.