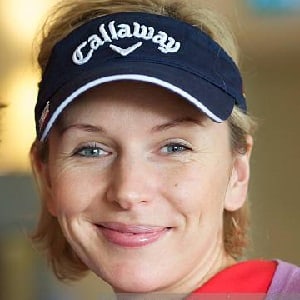 At present, she is a married woman. She is married to European Tour golfer, Nick Dougherty. The pair married on New Year’s Eve 2010.

Additionally, they have a son and a daughter together. Their marriage is going strong as there is no news regarding any extramarital affairs at present.

Who is Di Stewart?

Di Stewart is an English television presenter. People mostly know her as the presenter of ‘Golf Night’ on Sky Sports. Additionally, she is currently married to European Tour golfer, Nick Dougherty.

Stewart was born in Salford as Diana “Di” Stewart on January 18, 1979. Throughout her childhood years, she grew up in Salford, Greater Manchester. She is of British nationality.

Furthermore, there are no details available about her ethnic background at present. Di became interested in the world of golf at an early age and hence initially picked a set of clubs at the age of six.

Talking about her education, Stewart attended Stockport Grammar School. In addition, she also went to the University of Newcastle upon Tyne. There, she studied German.

Di Stewart initially began her career in Galaxy Radio as part of their ground crew. Later, she joined Sky Sports. Eventually, Stewart was selected as show’s host presenters after Sky launched a dedicated golf program in 2007. Additionally, she has also appeared in other programs like ‘More Big Ideas’ and ‘Game Changers.’

Furthermore, in 2005, Stewart played in the amateur teams during the Dunhill Links Championship. She has appeared in several television ads with ESPN’s Scott Van Pelt.

Stewart has not revealed her current salary. Furthermore, there are no details available about her estimated net worth at present.

Stewart has not been part of any notable controversies in her career. Furthermore, at present, there are no rumors concerning Stewart and her career.

Talking about her body measurement, there are no details available about Di Stewart’s height and weight. Her hair color is blonde and her eye color is blue.