Diana Krall is a Canadian musician. She is also a singer and pianist. Diana is married to her musician husband since 2003.

Diana Krall is married to the English musician Elvis Costello. The couple began dating each other back in the 2000s.

They have been together for 15 years now and they are still together. Their relationship is going very well and there is no chance of divorce at all. She is living a happy life with her husband and children. There are no other records of her past relationships. 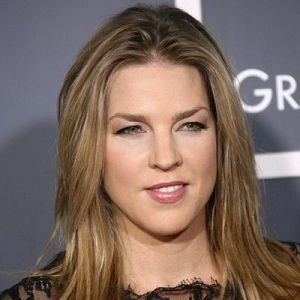 You're creating an intimacy that everybody feels, that it's their experience, not yours. I'll never introduce a song and say, now this song is about 'my' broken heart

I'm not really on a mission to tell anybody anything. I'd rather be figured out.

Who is Diana Krall?

She has sold more than 6 million albums in the US and over 15 million worldwide. Diana is the only jazz singer to have eight albums debuting at the top of the Billboard Jazz Albums.

Diana Krall was born on 16 November 1964, in Nanaimo, British Columbia, Canada, and her birth name is Diana Jean Krall. Her nationality is Canadian and her ethnicity is Mixed (Czech, English, Scottish, German).

She is the daughter of Adella(mother) and Stephen Krall(father). Her mother was an elementary school teacher and her father is an accountant. Her mother died in 2002 because of multiple myeloma. She has a sister named Michelle Krall who is a police officer. She does not have any brothers.

After completing her course at Berklee College of Music, Diana returned to Canada and began her career as a professional singer and musician in 1993. She released her first album, Stepping Out in 1993. After two years, she released her second album titled Only Trust Your Heart.

In 1996, she was nominated for Grammy Awards for her third album, “All for You: A Dedication to the Nat King Cole Trio”. She joined Ray Charles on his Genius Loves Company album in 2004 on the song, “You Don’t Know Me”. Her album “From This Moment On” was nominated for Best Jazz Vocal Album in 2007.

Her album These Days earned an Album of the Year nominee in 2008. She has also appeared in several TV shows including Anything Else, Mississippi Rising, and Public Enemies. Diana has won five Grammy Awards and eight Juno Awards to date.

Krall was awarded the Order of British Columbia in 2000. In 2003, she received an honorary Ph.D. from the University of Victoria and he was inducted into Canada’s Walk of Fame in 2004.

She is one of the highest-paid singers and she has accumulated a net worth of $20 million as of 2022, throughout her career but her salary is not revealed yet.

Talking about the rumors and controversy, Diana was rumored to have hooked up with the famous American vocalist Michael Franks in her past but none of them ever talked about the rumor.

Krall has been a straight person in her life and she has never been in any controversy in her entire career.

Diana Krall has a height of 5 feet 8.5 inches. Her body weighs 59kg. She has blonde hair and green eye. Talking about her body measurement, her breast size is 36 inches. Her waist size is 26 inches and her hip size is 32 inches. Furthermore, her shoe size is 10(US) and her dress size is 7(US).