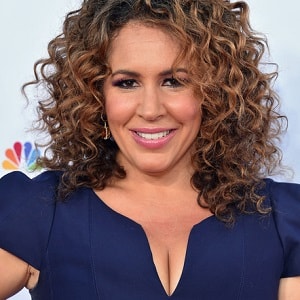 Diana-Maria-Riva is married. Her husband’s name is Mike Smith. However, details about their wedding are not disclosed.

This couple is blessed with a son named Justin Smith.

She was born in Cincinnati, Ohio, on July 22, 1969. Her birth name is Diana-Maria Uhlenbrock. She is currently 51 years old.

Her father’s name is Chris B. Uhlenbrock (dentist) and her mother’s name is Maria. She holds American citizenship and her ethnicity is a mix of  German, Swiss-German, some English, and the Dominican Republic.

There is no information available regarding Diana’s education history.

Diana-Maria Riva debuted acting from the short-lived television series ‘Common law’. Later she made her guest appearance in ‘Murder One’, ‘Party of Five’, ‘The X Files’, ‘NYPD Blue’, ‘The Drew Carey Show’, ‘Everybody Loves Raymond’, ‘CSI’, ‘Less Than Perfect and Castle’. She made her celebrity guest appearance on the Donny Osmond version of the game show ‘Pyramid’.

Diana portrayed the recurring roles in ‘Sabrina The Teenage Witch’, ‘The West Wing’, and ‘Studio 60 on the Sunset Strip’ and played as the lead performer in the summer 2007 series ‘Side Order of Life’.

She played the role of Lieutenant Ana Ruiz in the 2010 FOX series ‘The Good Guys’ and Jack Bailey in the Dallas Police Department. She also performed as the mother-in-law of Rob Schneider’s title character in the sitcom ‘¡Rob!’ and cast as Mrs. Rodriguez in ‘Man with a Plan’ in 2016.

She was nominated for Imagen Award in the category Best Supporting Actress- Television for ‘telenovela’ in 2016.

She has an estimated net worth of $3 million and she has collected that sum of money from her professional career.

She was starred in the TV series ‘¡Rob!’ but this series because of mixed reviews.

Diana-Maria Riva has a height of 5 ft 6 inches and weighs 73 kg. She has got dark brown hair and dark brown eyes. Her body measurement is 32-24-35 inches.

To know more about Bre Tiesi, Nora Dunn, and Amy Yasbeck, please click on the link.