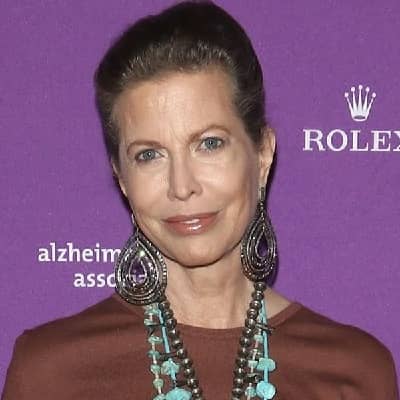 Diandra Luker was previously married to her ex-husband, Michael Douglas. Michael Douglas is an American actor and producer. They first met at the swearing-in ceremony of the US President. Eventually, they started dating after two weeks of courtship.

On March 20, 1977, they tied their lifelong knot. They together gave birth to the baby boy, Cameron Douglas. However, their marital life crashed after a 23-year long relation. They divorced in June 2000.

Later, Diandra started dating businessman Zach Hampton Bacon III and also gave birth to twin boys Hudson and Hawk in the year 2004. However, they also parted ways after few years. Currently, she is single and a mother of children.

Who is Diandra Luker?

Diandra Luker is an American Businesswoman, entrepreneur, and film producer who has produced and appeared on various tv series, Movies, and Award Ceremonies. Likewise, she is famous for being the ex-spouse of film actor Michael Douglas.

Diandra Luker was born on 30th November 1955 in Majorca, Spain. As of 2021, she will be celebrating her 66th birthday. Her full name is Diandra DeMorrell Luker.

She was raised up by her Anglo-French mother and a Swiss father whose identity is not known. Her father was a former Swiss-American diplomat. Likewise, she might be the only daughter of her parents as she has never talked about her sibling. While she was young, she moved to the USA along with her parents.

She is of American nationality. Her ethnicity is mixed. Similarly, her birth sign is Scorpio and her religion is Christianity.

Talking about her education, she completed her boarding school in Switzerland. She also enrolled in the Edmund A. Walsh School of Foreign Service in Georgetown.

Diandra Luker made his professional big stage appearance in The 57th Annual Academy Awards in 1985 along with her then-husband, Michael Douglas. Moreover, she has produced series and documentaries such as American Masters, America’s Music: The Roots of Country, Off the Menu: The Last Days of Chasen’s, and Broken Line’s.

Besides tv films, she was also an active member of the ‘Red Cross’ during her youth days. She also co-produced the ‘Beatrice Woods: Mama of Dada’ in 1993. Anyway, she is famous for being the ex-spouse of film actor Michael Douglas.

Of all her movies, shows, and dedication, she has a net worth of around $50M. Likewise, Diandra lives in a lavish mansion in Beverly Hills, Los Angeles, United States of America.

Additionally, her ex-spouse, Michael Douglas has a net worth of around $350M.

There are no rumors and controversies about her personal life or professional life. Likewise, Diandra is a dedicated and respected personality who tries to mark her place in the showbiz industry.

Diandra stands at 5 feet 7 inches tall and weighs 58 kg. Similarly, she has a slim-shaped body. Moreover, she has blonde hair and dark brown color eyes with a skin tone of white.