Diane Franklin is and American actress, model, producer. She started as a child actor. Diane is married to her longtime girlfriend since 1989, and has two children. 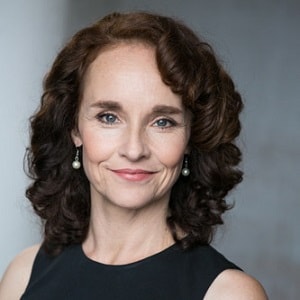 I still love acting. I just think it's so much fun. I'm very serious about it but I'm still having a blast and I just love it

When you grow up on Long Island, you just want to get to the city. It's a big trek. You really want it because it's a different way of life. California is more laid back. In New York, there's more of a feeling of striving for perfection, which is admirable. I grew from being a Long Island girl, but at the same time I didn't forget my roots and I didn't forget the people around me.

Diane Franklin is a married woman. She has been married to animation writer Ray De Laurentis since May 6, 1989. The couple has welcomed two children: Olivia and Nick.

The couple’s daughter Olivia is a comedienne/filmmaker and she is also the co-founder of YouTube channel Barely Legal Comedy. Also, Olivia is going to debut her film directorial with 2019’s ‘This Gets Ruff’ in which her mother will co-star.

On the other hand, Nick is a musician and he will released his first single in 2019.

Who is Diane Franklin?

Diane Franklin is an American actress, producer, and fashion model who is best known for her role as Monique in the comedy ‘Better Off Dead’ in 1985. She is the first teen actress to kick-started the curly-hair fashion trend of the 80s.

Diane Franklin was born on February 11, 1962, in Plainview, New York, USA. She is currently 58 years old. Diane has not provided information regarding her parents, siblings, and childhood.

She sang the National Anthem at Dodger Stadium on June 1, 2004. Diane holds American citizenship but her ethnicity is English.

Talking about her education, there is no information about her college and university names.

Diane Franklin started her career from the fae of 10. She began with modeling, commercials, theatre, and soap opera works like Coca-Cola, Trident, Maxwell House Cofee, and Jell-O.

She got her first major role in the film ‘The Last American Virgin’ in 1982 in which she appeared as Karen. In the same year, she portrayed the role of Patricia Montelli in ‘Amityville II: The Possession’. Her breakthrough performance was from the comedy ‘Better Off Dead’ in which she appeared as the female lead Monique, a French exchange student. After that, she appeared as one of the Princess in ‘Bill & Ted’s Excellent Adventure’.

Her television roles include Paula/Paulette in ‘Alfred Hitchcock Presents’ in 1989, Phyllis Grant in ‘Murder, She Wrote’ in 1991, TV Announcer in ‘Family Law’ in 2000, and many more.

It seems the 56 years old actress has not been awarded and nominated for her work to date.

The talented actress has not revealed any data about her salary and other income. But her net worth is estimated at around $9 million.

Diane loves to keep her personal information secret and she has not been involved in any types of rumors and controversies in her career.

She has a height of  5 ft. 2 inches and she has green hair and dark brown eyes. Also, she has dark curly hair and a beauty mark above the right side of the mouth.