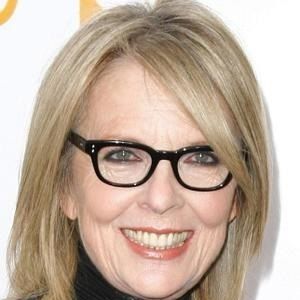 I build a wall around myself. I'm hard to get to know. Any trait you have, it gets worse as you go along

I think about dying every single day. I've lost lots of friends, and they die in the most bizarre ways. It's like, "That can't possibly be! How could that have happened?" And all I can think is, "That could have been me."

I had a career and I came to motherhood late and am not married and have never had such a trusting relationship with a man - and trust is where the real power of love comes from.

Moreover, she was in a relationship with Edward Joseph Ruscha in 1977. However, their relationship didn’t last long and decided to put an end to their romance. She dated Steve Jobs in 1970s but they broke up.

Lastly, she was in a relationship with Keanu Reeves in 2005 but the relationship didn’t last long and they broke up. Therefore, she has two children namely, Dexter Keaton, Duke Keaton

Who is Diane Keaton?

Diane is an American film actress, director, and producer. Whereas, she is also a real estate developer. Similarly, she is the recipient of various accolades including an Academy Award, a BAFTA Award, two Golden Globe Awards, and the AFI Life Achievement Award.

Diane Keaton was born in Los Angeles, California, the United States on January 5, 1946, age (73). She is the daughter of Jack Newton Ignatius Hall (father) and Dorothy Deanne Keaton (mother). Her father was a real estate broker and civil engineer and her mother was a homemaker and amateur photographer.

In fact, she has also credited Katharine Hepburn, whom she admires for playing strong and independent women, as one of her inspirations.

On talking about her education, she attended the ‘Santa Ana High School’  and graduated from there in 1963.

On talking about her profession, she performed at nightclubs as a singer. Similarly, in 1968, she landed up a role in the Broadway rock musical ‘Hair’. She famously refused to strip in the role which though optionally required actors to perform nude at the end of Act I.

During 1970, she also performed in Woody Allen’s hit Broadway stage show ‘Play It Again, Sam’. On the same year, she also made her debut in big screen as Joan Vecchio in the comedy film ‘Lovers and Other Strangers’.

Similarly, in 1971, she also essayed the character of Renata Wallinger in the short film ‘Men of Crisis: The Harvey Wallinger Story’. She also performed in single episodes of two television series ‘The F.B.I’ and ‘Mannix’ respectively.

Eventually, she made a remarkable comeback in the comedy genre with the Woody Allen films as Linda in 1972 released ‘Play It Again, Sam’ and as Luna Schlosser in 1973 released ‘Sleeper’. During 1974, she also reprised her role of Kay Adams in ‘The Godfather’ sequel, ‘The Godfather Part II’.

Moreover, she started the 1990s with reprising her role as Kay Adams in the 1990 released film ‘The Godfather Part III’. Similarly, she reprised the role of Nina Banks in the 1995 sequel ‘Father of the Bride Part II’.

There is no information regarding her income, salary. Whereas, her net worth is estimated to be around $ 50 million according to the sources.

There was a rumor that Diane Keaton dated Steve Jobs when the two were neighbors in New York in the late 1970s. However, the two had a brief romance.  Currently, she is far from rumors and controversies.

On talking about his body measurements, Diane has a height of 5 feet 6 inches. Additionally, she weighs is 56 Kg. In addition, Diane’s hair color is Blonde and her eye color is green.

Also, read the affair, salary, the net worth, controversy, and the bio of Shirley Maclaine, Lauren London